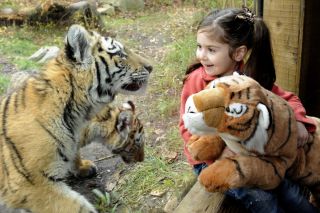 John Calvelli is executive vice president for public affairs at the Wildlife Conservation Society (WCS) and director of the 96 Elephants campaign. This Op-Ed was adapted from one that appeared in the Huffington Post. Calvelli contributed this article to Live Science's Expert Voices: Op-Ed & Insights.

If you've visited a zoo or aquarium in recent years, there's a good chance that you've noticed something new. In addition to providing up-close encounters with some of the planet's most magnificent species , today's zoological parks are placing a growing emphasis on conservation awareness and action.

Indeed, if you were to ask the staff of almost any zoo or aquarium about their primary mission, they would underscore the education of guests regarding the conservation status of the animals they are observing and the threats those species face in the wild.

Zoos and aquariums are living museums where children and adults alike are witness to the wonders of the natural world. Encounters with species both exotic and familiar fill guests with awe and excite them to learn more about park animals' wild habitats, many of which are in serious decline. That process helps instill a conservation ethic within the general public that can pay dividends when drawing attention to a particular conservation crisis or policy.

This was foremost on my mind as WCS executive vice president and Bronx Zoo director Jim Breheny, vice president for species conservation Liz Bennett, and I attended the Winter Meeting of the Association of Zoos and Aquariums (AZA) recently. We attended to provide senior zoo representatives from across the nation with an update on the forest-elephant poaching and trafficking crisis in central Africa, along with a programmatic overview of WCS's field work.

We also led a discussion of our 96 Elephants public campaign. That effort, launched by WCS in 2013 and named for the number African elephants killed on average each day of 2012, seeks to bring attention and consensus to a poaching crisis that has eliminated a stunning 65 percent of the entire African elephant population since 2002.

The campaign rests on three pillars we have identified to end the crisis: Stop the killing, stop the trafficking and stop the demand. Getting the word out to domestic audiences is key, because by some reports the United States is the second largest market for ivory in the world after China. WCS is working to educate the public about the growth of criminal syndicates engaged in this slaughter, driven largely by the skyrocketing value of ivory in Asia, and build support for a temporary ban or moratorium on the sale and purchase of ivory globally. [Taking a Page from Eliot Ness to Fight Wildlife Trafficking (Op-Ed)]

Our presence at the AZA's Winter Meeting gave more institutions an opportunity to hear our message and become involved. So far, 115 different zoos and aquariums have signed on as 96 Elephants partners. All have the ability to spread the message of elephant conservation to their park-going audiences — and zoos and aquariums are making a difference. Each in their own way is helping to focus attention, educate their visitors and begin the process of changing the status quo.

For example, last fall the Indianapolis Zoo gathered 96 school children for a group picture to promote greater awareness of the elephant-poaching crisis. The Houston Zoo is incorporating campaign messaging into its promotion of the birth of a new elephant calf and is currently working to collect 5,000 signatures to hand over to local elected leaders, asking them to push for a total ban on the sale of ivory and ivory products in the United States.

A bill to ban the commercial sale of ivory in New York originated over conversations at the Bronx Zoo. And over the next month, three Chicago institutions — the Chicago Zoological Society's Brookfield Zoo, the Lincoln Park Zoo and Shedd Aquarium — will likewise be working with local and state lawmakers to raise awareness on the need for a moratorium on ivory sales.

Clearly a movement is growing to protect elephants and other iconic species from devastating losses. The 96 Elephants campaign underscores both the power of conservation to move people to take action and the important role of zoos and aquariums — and their visitors — when working together to achieve public-policy goals. To help elephants survive and thrive, we must now work state by state to ensure there are adequate laws on the books to stop the sale of ivory.

So the next time you are visiting a zoo or aquarium, you may want to listen a bit closer to zoo professionals or read the exhibit material a bit more carefully. Chances are pretty good that you will be learning about the latest crisis befalling our wildlife partners on this planet and how we can all work together to help make a difference.

This Op-Ed was adapted from the article "Zoos & Aquariums and Their Visitors Can Be Critical Advocates for Conservation Action" that appeared on Huffington Post. Follow all of the Expert Voices issues and debates — and become part of the discussion — on Facebook, Twitter and Google +. The views expressed are those of the author and do not necessarily reflect the views of the publisher. This version of the article was originally published on Live Science.