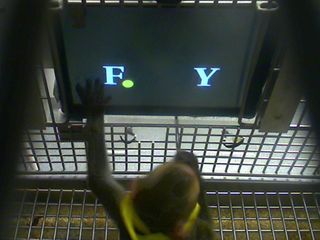 A rhesus monkey chooses between two letters, each of which represents different-sized rewards. Monkeys picked the symbols with the larger reward value 90 percent of the time.
(Image: © Margaret S. Livingstone)

Monkeys can use symbols to add — a finding that sheds light on the evolutionary origins of math, researchers say.

Humans possess a sophisticated combination of mathematical capabilities unmatched in the animal kingdom. Still, there is increasing evidence that at least some of these abilities are shared with other species. For instance, many animals can figure out which of two clusters of dots is larger or smaller.

Both animals and humans can estimate how many items there are in a group, and the precision of these estimates decreases the more items there are. For example, although it is easy to recognize the difference between two and four items, it is more difficult to distinguish 22 from 24 items, even though both comparisons differ by the same amount. [The 9 Most Massive Numbers in Existence]

"You would have trouble distinguishing 'oo o ooo ooo ooo ooo oo ooo' [a string of 20 symbols] from 'o ooo oooo oo oooo ooo ooo o' [a string of 21 symbols], but if I asked you whether 20 was larger or smaller than 21, you could answer faster and more accurately," said lead study author Margaret Livingstone, a neuroscientist at Harvard University Medical School.

The scientists taught three rhesus monkeys the values of 26 distinct symbols — the 10 Arabic numerals, and 16 letters. Each symbol was associated with zero to 25 drops of a reward of water, juice or orange soda.

Given the choice of two different symbols, the monkeys chose the symbol that represented the larger reward with up to 90 percent accuracy. This suggested the monkeys learned to distinguish the symbols and assign them specific values, Livingstone said.

"The monkeys want the most of whatever is out there, and this is just one of many ways to figure out the best way to get the most," she said.

"They turned out to be like us — more accurate when values were represented by symbols than by the number of dots," Livingstone said. "It tells us what good symbols are."

To confirm the monkeys were performing a calculation and not just memorizing the value of each pair of symbols, the scientists next trained the monkeys to recognize another set of 26 symbols, each made of different clusters of four or five squares. The monkeys immediately applied their ability to add to these new symbols. The monkeys showed less accuracy with these new symbols than with the previous symbols, presumably because they were less familiar with the new symbols, Livingstone said.

"The monkeys did not memorize the addition of pairs of numerals; they just fairly accurately combined two symbols," Livingstone said. The scientists detailed their findings online today (April 21) in the journal Proceedings of the National Academy of Sciences.

In future studies with the monkeys, "we will ask whether they can learn to multiply," Livingstone said. Such research could shed more light on how the monkeys think about numbers.