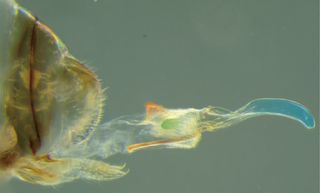 Females with penislike genitals and males with vaginalike organs are cases of a new extreme reversal of sex roles researchers have discovered in little-known cave insects.

These are the first examples of animals with genitalia that reverse the traditional sex roles, and the discovery could shed light on the conflict between the sexes in the animal kingdom, investigators said.

Scientists analyzed four species of insects from extremely dry caves in Brazil. All four species belong to the genus Neotrogla, just as dogs, wolves, coyotes and jackals belong to genus Canis. The first Neotrogla was discovered 18 years ago; adult Neotrogla range from about 2.7 to 3.7 millimeters (0.11 to 0.15 inches) long. [See Photos of the Genital-Reversed Cave Insects]

The researchers were astonished to discover that the females of these species had penislike genitals dubbed gynosomes, a complex organ composed of muscles, ducts, membranes and spikes. In contrast, the males possess vaginalike phallosomes.

"Neotrogla species constitute the first cases in nature in which genitalia are reversed," said study co-author Rodrigo Ferreira, a cave biologist at the Federal University of Lavras in Brazil.

The gynosome is a "completely novel structure in evolution," said lead study author Kazunori Yoshizawa, an entomologist at Hokkaido University in Japan. "Evolution of such novelties is exceptionally rare, maybe comparable with the origin of insect wings."

During copulation, which lasts a whopping 40 to 70 hours, the females insert their gynosomes into the male organs. The intricate female organs collect sperm capsules from the males. [The 7 Weirdest Animal Penises]

Once inside a male, the membranous part of the female gynosome inflates, and numerous spines on the organ anchor the two insects together. Females can hold males very tightly — in one instance, when the scientists attempted to pull a pair apart, the male's abdomen was ripped from the rest of his body without breaking the genital coupling.

The researchers suspect this strange reversal of sex roles evolved because of the generous amounts of nutritious semen that males include within their sperm capsules as nuptial gifts for their mates. The caves in which these insects live are poor in resources, making it advantageous for females to mate more often.

"It is very likely that female Neotrogla can coercively grasp and copulate with a reluctant male," Yoshizawa told Live Science. "In animals, coercive mating is generally an exclusive feature of males."

The long times spent copulating may also be due to the harsh nature of the caves.

"Longer matings can allow a higher amount of semen to be transferred," Ferreira told Live Science.

Sex roles are occasionally reversed in the animal kingdom. For instance, male seahorses typically raise offspring in brooding pouches. And for some mites, the female genitals are long tubes used to receive sperm. However, these mite genitals lack the anchors seen in gynosomes, so they cannot be used to coerce sex as Neotrogla do.

Future research could further investigate the unique sex lives of these cave insects to explore ideas regarding the conflict between the sexes in the animal kingdom. One interesting question has to do with how male Neotrogla deal with coercive sex.

The researchers do not yet have direct evidence to answer this question. However, they speculate that male Neotrogla might control how nutritious their nuptial gifts are depending on the quality of their mates.

Many caves left to explore

These odd discoveries could be the first of many from Brazilian caves. In recent years, scientists have uncovered dozens of new species in these caverns.

"This indicates the huge potential that Brazil possesses regarding cave fauna," Ferreira said. "Brazil might have more than 150,000 caves."

However, Brazilian cave fauna may be seriously endangered.

"The Brazilian laws regarding cave protection have changed in recent years and now the caves, which used to be protected, are under risk," Ferreira said. "Many new species, some of which could bring huge advances for science — biology, evolution or even some of biotechnological interest — are threatened. Many species are under the risk of extinction even before being discovered."

The scientists detailed their findings April 17 in the journal Current Biology.