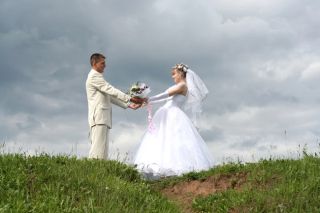 People who are looking to ease depression may have a new treatment option--marriage.

A recent study suggests that marriage provides a greater psychological boost to depressed people than to happy people, even if the marriage is so-so.

Previous studies have suggested that the psychological perks of marriage depend upon marriage quality--a happy marriage gives rise to a happy couple, and vice versa.

Other studies have shown that depressed people, who tend to communicate poorly and require more caring and support than happy people, also end up in unhappier marriages.

So Adrianne Frech, a sociology graduate student at Ohio State University, and her colleague, Kristi Williams, speculated that happy people would garner more psychological perks from marriage than depressed people.

To test their theory, they looked at a sample of 3,066 men and women who had been interviewed and tested for depression once in either 1987 or 1988 and then again five years later. In the interviews, they were asked about the quality of their marriage (if they were married).

On average, controlling for differences in depression, subjects who had gotten married over the five-year span between the two interviews reported improved psychological well-being in the second interview--scoring an average of 3.42 points lower on the 84-point depression scale--than their counterparts who did not marry.

In other words, marriage provided a much bigger psychological boost to the depressed subjects than to the happy subjects.

“We were surprised,” Frech told LiveScience. “We expected the depressed to have worse marital quality and therefore benefit less from a transition into marriage.”

The findings, to be published in the Journal of Health and Social Behavior, hold true even though depressed people do have unhappier marriages. “The depressed benefit more from a transition into marriage despite their having, on average, worse marital quality,” Frech noted.

The big remaining question, she says, is why depressed people benefit more from marriage than happy people. It could be that marriage provides the companionship and emotional support needed to help alleviate depression, she said.