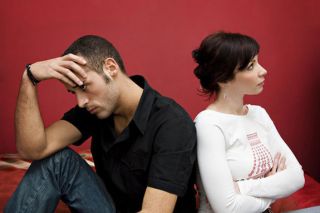 Spouses who are feeling "hangry" may be more aggressive to each other.
(Image: © Dreamstime)

Spouses who are feeling "hangry," and have low blood sugar levels that could explain their feeling both hungry and angry, may be more likely to be aggressive to each other, according to a new study.

In the study, the lower the participants' glucose levels were, the more pins they inserted into the voodoo dolls that represented their spouses. The spouses with lower blood-sugar levels were also more willing to subject their partners to loud noises, compared with those whose glucose levels were average.

The study may offer some potential advice for couples looking to avoid arguments.

"If you're going to talk about a potentially heated topic, make sure you're not hungry before you have that discussion, because hungry people are often angry people," said study author Brad Bushman, a professor of communication and psychology at The Ohio State University.

In the study, the researchers measured glucose levels in 107 married couples each evening for 21 days. Each participant was asked to fill out a questionnaire about how satisfied he or she was with his or her marriage. The researchers also gave each participant a voodoo doll that represented his or her spouse, and 51 pins. At the end of each day, the spouses could insert up to 51 pins into the doll, depending on how angry they were at their significant other.

In the second part of the experiment, the participants competed against their spouses, and the spouse who pressed a button faster once a square turned red on the computer screen won. Each time they won, participants were able to subject their spouses to noises through headphones. The spouses were in separate rooms during the experiment, so the winners didn't know that their husbands or wives were not really experiencing the noises.

Previous research had found a link between low glucose levels and poor self-control. Self-control is managed by the brain's prefrontal cortex, which is responsible for regulating emotions, with anger being the "emotion that's the most difficult to control," Bushman told Live Science.

The findings are published today (April 14) in the journal PNAS.