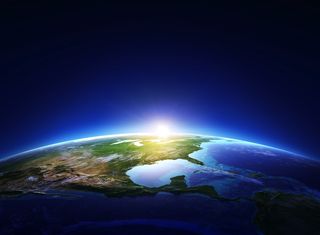 Geocentrism, a long-debunked idea, holds that the Earth is the center of the universe.
(Image: © Earth image via Shutterstock)

The trailer for a new documentary making its way around the Internet this week seems to make the case for a long-outdated theory about how the universe works. "The Principle" appears to be a documentary about Geocentrism — the now debunked idea that the Earth is the center of the universe, with the sun revolving around this planet.

"'The Principle', destined to become one of the most controversial films of our time, brings before the public eye astonishing results from recent large-scale surveys of our universe — surveys which disclose unexpected evidence of a preferred direction in the cosmos, aligned with our supposedly insignificant Earth," representatives of the film wrote on the YouTube page for the trailer.

The documentary trailer features famous scientists including Lawrence Krauss and Michio Kaku in interviews, however, Krauss wrote today (April 8) on Twitter that he had nothing to do with the film. "For all who asked: Some clips of me apparently were mined for movie on geocentricism," Krauss (@LKrauss1) wrote.

Phil Plait wrote a tweet about the trailer on his Bad Astronomy blog hosted by Slate, saying "So stupid does disservice to word nonsense. Ignore it.".

The trailer is narrated by the actress Kate Mulgrew, who appeared in "Star Trek: Voyager," but Mulgrew made a statement through Facebook saying that she agrees with Krauss. "I am not a geocentrist, nor am I in any way a proponent of geocentrism," Mulgrew said. "… I was a voice for hire, and a misinformed one, at that. I apologize for any confusion that my voice on this trailer may have caused."