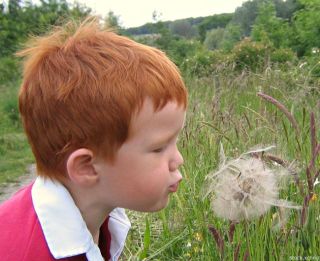 A redheaded boy blows the seeds from a dandelion.
(Image: © stock.xchng)

Primatologists know humans, apes and monkeys can see red, but have quarreled over what initially locked the adaptation into place. Did it first help primates find meals, or was the ability to see a red-headed, red-skinned mate from a mile away the first benefit of full-color vision? A new study shows that apes first evolved color vision to help them forage food, after which nature made red the sexiest color around and spiked apes’ evolutionary tree with red hair and skin. The findings are detailed in this week’s issue of the American Naturalist. André Fernandez, an evolutionary biologist at Ohio University and co-author of the paper, explained that neuroscientists have already found animals are highly attracted to brilliant colors. “So, it is reasonable for primates with trichromatic color vision to respond more when they see bright colors” like red, he said. To discover the true origin of red hair, Fernandez collected data on the hair and skin color, color vision and sexual habits of 203 different primate species. He then plugged the data into the primate evolutionary tree According to the tree, or phylogeny, color vision arose first, followed by the appearance of red hair, skin and advanced mating systems. “It looks like red skin and hair became a sexual preference,” said evolutionary biologist Molly Morris, the other study’s author. “So while the benefits in terms of eating may not apply anymore,” she said, it’s still socially—and sexually—relevant for an ape to see red.