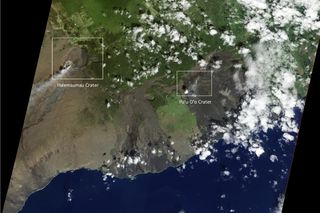 Volcanology has come a long way since the days of Pompeii. Now, satellite-based systems offer a way of measuring whether a volcano is likely to erupt soon.

Satellite radar maps show that volcanoes usually deform before an eruption. Measuring that deformation from space could make it possible to forecast when volcanoes will erupt, especially in remote areas that can't be accessed easily by scientists on the ground, researchers say.

"Improving how we anticipate [volcanic] activity using new technology such as this is an important first step in doing better at forecasting and preparing for volcanic eruptions," Jenni Barclay, a volcanologist at STREVA, a British research consortium that aims to mitigate the impact of volcanic activity on people and their assets, said in a statement. [See Amazing Images of Volcanoes from Space]

Magma moving beneath the Earth's surface can cause the surface of volcanoes to deform and rise, potentially signaling an eruption is imminent. But sometimes, the magma stops short of the surface, and no eruption occurs.

A team of scientists looked at archived satellite data for more than 500 volcanoes around the world. Satellite radar revealed detailed maps of volcanic deformation, allowing the researchers to examine even the most inaccessible volcanoes.

These findings suggest that deformation can be a good indicator of eruptions, the researchers said. Satellite radar can be used to identify volcanoes bulging with magma, which can then be investigated from the ground.

But many factors can lead to volcanic deformation, and such factors don't always result in an eruption. The type of volcanic rock, its tectonic characteristics, the depth of the magma and the rate at which it flows all play roles.

The satellite record is good for capturing volcanoes that erupt every few months or years, and these images often capture both deformation and eruption. For volcanoes with longer eruption cycles, that may erupt once every hundred thousand years, the satellite only captures one of these events, making it hard to link the two.

Satellites typically capture radar images of volcanoes only a few times per year, so they may miss the shortest eruption cycles in which deformation precedes an eruption by just a few days.

Future satellites will acquire more data, and they'll do so more frequently. The European Space Agency plans to launch its next radar mission, Sentinel-1, in April. The satellite will collect images all over the globe every six to 12 days.

In developing countries, the observations from Sentinel-1 may be the only warning of an impending eruption, researchers said.