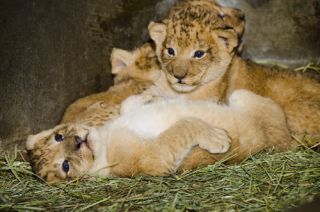 The zoo launched a storm of protests when it shot and killed a 2-year-old giraffe named Marius in February, dissecting the animal and feeding the remains to the lions in front of zoo visitors.

The zoo has now killed two adult lions and their two 10-month-old cubs to make room for a new male lion, so as not to disrupt the "pride's natural structure and behavior," the Associated Press reported. The zoo said the cubs were too young to fend for themselves and would have been killed by the new male lion anyway. The new male and two females born in 2012 will hopefully form the seed of a new pride, zoo officials said.

Regarding how the outcry after the Marius euthanization affected their current decision, zoo chief Steffen Stræde said: "Marius hasn't made us the least bit afraid, because what we are doing is the most correct thing to do," as quoted by the Danish news agency Ritzau, The Copenhagen Post.

American zoos don't euthanize healthy animals. Instead, they use contraceptive techniques to prevent inbreeding and overpopulation, according to USA Today.