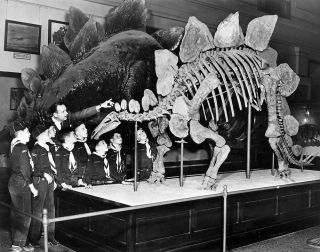 A group of Boy Scouts examines the skeleton of the Jurassic dinosaur Stegosaurus at the Smithsonian.
(Image: © Smithsonian Institution)

Dinosaurs that roamed the Earth 250 million years ago knew a world with five times more carbon dioxide than is present on Earth today, researchers say, and new techniques for estimating the amount of carbon dioxide on prehistoric Earth may help scientists predict how Earth's climate may change in the future.

The findings are detailed in a recent paper published in the journal Proceedings of the National Academy of Sciences.

During the Jurassic Period, dinosaurs — ranging from the plant-eating Diplodocus and Brachiosaurus to the meat-craving Ceratosaurus and Megalosaurus — ruled the world. During this time, the Earth's interior was not standing still; rather, the supercontinent Pangaea had started to split into two smaller landmasses, called Laurasia and Gondwana.

These tectonic movements made the oceans close up and the tectonic plates sink into the Earth. This process, called subduction,led to volcanism at the surface, with rocks constantly melting and emitting CO2 into the atmosphere. Huge amounts of this greenhouse gas made the climate during the Jurassic Period extremely humid and warm, said geoscientist Douwe van der Meer, lead author of the study and a researcher at Utrecht University in the Netherlands. [Weather vs. Climate: Test Yourself]

Scientists have known for some time that a large amount of volcanic activity results in more CO2 than is present on Earth today, but with previous methods, it had been tricky to come up with a reliable estimate.

To do so, the researchers analyzed earthquake waves traveling through Earth, to image the structure of the Earth's interior.

"This method is comparable to CT scans used in hospitals to image inside bodies," van der Meer said. "With sufficient earthquake wave travel times, one can create a velocity model of the Earth. Faster regions are more dense, colder material plates that sunk into the Earth."

The aim has been to demonstrate how variations in plate tectonics have led to variations in CO2 emissions from volcanoes 250 million years ago.

And the deeper the imaging equipment goes, the farther back in time scientists can see — as far back as 250 million years, said van der Meer. "Essentially, we can see the breakup of the supercontinent Pangaea, and the opening and closing of oceans," he said.

In other words, the scans depicted the interior of the Earth, enabling the researchers to "see" the tectonic plates that have sunk into the planet over the past 250 million years.

The researchers then quantified the plates that have sunk into the deep Earth, and their calculations showed that the Earth produced twice as much CO2 as there is today.

The scientists then inserted this number into a comprehensive, commonly used paleoclimate model, to calculate how all the volcanic CO2 emissions at the time would have added up. Because there was also less CO2 being removed from the atmosphere by vegetation and by weathering rocks than today, total atmospheric CO2 levels were probably five times higher than at the present, the researchers said.

The findings suggest much higher CO2 levels than had been estimated in previous studies conducted in the 1980s and 1990s. That research had been based on indirect data from sea-level variations. Since then, scientists' understanding of Earth has improved significantly, and researchers already had begun to suspect that the old estimates were imperfect.

"They were fundamentally flawed in hindsight," said van der Meer. "Especially in the Jurassic Period, major differences were seen between the old and the new estimates."

"The higher CO2 levels [must] have [had] significant effects on the planet's climate, and its flora and fauna," he said.

And, in general, the concept of plate tectonics through time is crucial for a variety of geological processes, said van der Meer. "The rate of spreading plates dictates the height of mountains, the amount and location of ores, sea level and the magnetic field of the planet," he said. "For the first time, we have quantified in this study the link between plate tectonics and volcanic CO2 emissions — a major step forward in understanding and predicting the behavior of the Earth, and its consequences." [History's Biggest Earthquakes]

"The new estimates of CO2 emissions are crucial for determining the relationship between CO2 and climate," said climate researcher Appy Sluijs, also of Utrecht University and a co-author of the study. "Our new information from the deep Earth is independent of, and confirms existing data on, atmospheric CO2 levels as determined from fossils."

One of the researchers' goals is to understand the strong link between climate and volcanic CO2 emissions, and apply it to future climate-change predictions.

"As this study researched how much CO2 was emitted through time, we are now able to zoom into the most interesting time intervals," Sluijs said. "This will eventually lead to long-term predictions of future climate change."

"We are now producing more CO2 than all volcanoes on Earth," van der Meer added. "We will affect climate in ways that are unprecedented and unnatural. The question is how much climate will change. We can now answer this for the past and apply [it] to the future by extrapolation."