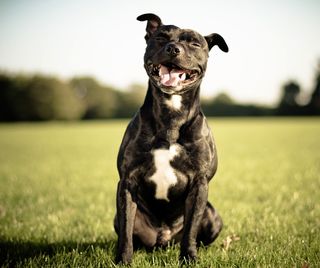 Marc Bekoff, emeritus professor at the University of Colorado, Boulder, is one of the world's pioneering cognitive ethologists, a Guggenheim Fellow, and co-founder with Jane Goodall of Ethologists for the Ethical Treatment of Animals. Bekoff's latest book is Why Dogs Hump and Bees Get Depressed (New World Library, 2013). This Op-Ed is adapted from one that appeared in Bekoff's column Animal Emotions in Psychology Today. He contributed this article to Live Science's Expert Voices: Op-Ed & Insights

Last month, I was asked to write an essay for a forthcoming issue of the journal Current Biology on the biology of fun. I was surprised that a professional journal would concern itself with this topic but equally pleased so I decided to write on play behavior because when animals — human and nonhuman — play, it's clear they are happy and having fun.

At around the same time, I had the pleasure of meeting June Gruber, now at Yale University, who soon will be my colleague at the University of Colorado, Boulder. She's interested in the negative consequences of being "too happy," and we've had great discussions about the evolution of nonhuman animal (animal) and human-animal emotions. Gruber also introduced me to a paper by Arizona State University's Randolph Nesse called "Natural selection and the elusiveness of happiness" in which he writes about the field called "diagonal psychology," which "considers the dangers of unwarranted positive states and the benefits of negative emotions in certain situations." I was thrilled to learn about Nesse's essay and to see that he is continuing to take an evolutionary approach to the study of human emotions.

Can animals be too happy or have too much fun on the run?

All of this led me to wonder: Can animals be too happy or have too much fun, to their detriment? For example, can a dog running here and there with reckless abandon injure herself? Can a happy wolf enjoying "fits of happiness" overstep bounds of play and put himself at risk by violating the rules of the game, say, by biting too hard, with an individual who can harm him? Can a marmot or a mouse who is playing fail to detect the presence of a predator? Can a chimpanzee too full of himself put himself at risk by ignoring social cues from others who are not as taken with him? Can a young animal spend too much energy playing rather than putting energy into growth and maintenance?

It also may be that in addition to the intensity of the unbounded exuberance, there is a risk associated with the context of the excessive positive feelings, in that they express themselves in the wrong time or in the wrong place. Gruber also pointed me in the direction of the research she has done with Dacher Keltnerat the University of California, Berkeley, on discrete positive emotions, asking if certain kinds of happy feelings are more dangerous for certain species (for example, too much pride vs. joy).

There are very few detailed and comparative data (field or otherwise) that are directly related to these questions. Based on a field study of Golden Marmots in Pakistan's Khunjerab National Park, UCLA biologist Daniel Blumsteinsuggested that play might expose individuals to predation. In his book "Play, Playfulness, Creativity and Innovation," (Cambridge, 2013) Cambridge University's Patrick Bateson mentions Macquarie University's Rob Harcourt's data showing that Southern fur seals are more likely to be killed by Southern sea lions when playing in the sea than at other times, perhaps because they are more conspicuous and less vigilant. Eighty-five percent of the sea lions Harcourt observed being killed were killed while playing in shallow water.

University of Idaho biologist John Byersreports on a few field studies that show that play can be risky, including observations of young lambs falling to their death while playing. Joel Berger, who teaches at the University of Montana, observed young bighorn sheep running into cacti, and when I was with Berger at his field site outside of Palm Desert, Calif., I saw a young sheep run shoulder-first into a cactus and scream unrelentingly. Of course, loud vocalizations could attract predators. Additionally, Tim Caro, at the University of California, Davis, noted that when young cheetahs play it reduces the hunting success of mothers.

Despite these observations, the comparative database is scant. For more on possible risks and costs to play, see Robert Fagen's "Animal Play Behavior," (Oxford, 1981), "Animal Play: Evolutionary, Comparative, and Ecological Perspectives,"(Cambridge, 1998) edited by John Byers and myself (the above data come from Byers's chapter in this book), Gordon Burghardt's "The Genesis of Animal Play," (Bradford, 2006), and Sergio and Vivien Pellis's "The Playful Brain" (Oneworld, 2010).

Clearly, there could well be physical and social consequences of being too happy or having too much fun. Usually, activities such as self-handicapping and role-reversing serve to keep play in check and restrain individuals from violating rules of the games. Play signals, such as the "bow" are also used to initiate social play and to punctuate and carefully negotiate ongoing and often frantic, vigorous and highly contagious play interactions. Indeed, play rarely escalates into full-blown aggression or harm because individuals play too hard with one another. Animals work hard to maintain fair play and fair play may be related to individual reproductive fitness. Nonetheless, young animals, in particular, engage in vigorous social and locomotor self-play — during which losing oneself in the activity can be detrimental.

Stabilizing selection and the evolution of happiness and fun

Much more research is needed to determine if animals can be too happy, or have too much fun to the point that it's costly to them. While I've been pondering these questions literally everyday since meeting Gruber, it came to me that an answer might lie by invoking what is called "stabilizing selection," in which there is selection against extremes of a given trait. Thus, there would be selection against being "too happy" or having "too much fun."

I hope the work of Gruber, Nesse, and this brief essay motivates people to delve into these questions more deeply. Gruber and I plan to work on these questions both theoretically and empirically. I can well imagine that animals can indeed be too happy or have too much fun or be too full of themselves just like humans can. But, we really don't know how often this occurs or how detrimental it is.

Bekoff's most recent Op-Ed was "Do Zoos Really Teach Visitors Anything?" This article was primarily adapted from the post "Can Animals Be Too Happy or Have Too Much Fun?" in Psychology Today. The views expressed are those of the author and do not necessarily reflect the views of the publisher. This version of the article was originally published on Live Science.