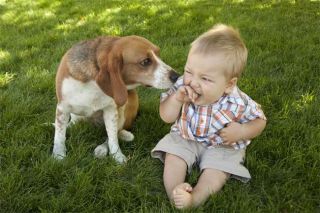 Babies as young as six months old can distinguish between friendly dog barks and threatening ones.
(Image: © Mark Philbrick/BYU.)

VANCOUVER, British Columbia — Animals and humans feel emotions very differently, so much so that it makes human emotions harder to study, according to a neuroscientist.

"When we see a cat purring or a dog wagging its tail in joy, we shouldn't expect that it's feeling what we are feeling when we experience joy," Joseph LeDoux, a neuroscientist at New York University, said on Feb. 18 in a talk at the American Association for the Advancement of Science annual meeting. "I'm not saying other animals don’t have feelings, just that they are different between different species of animals."

However these feelings and emotions are expressed — whether with the wag of a tail or a smile, they come from the same basic "survival circuits" in the brain, which are the same in all mammals.

"Everyone knows what emotion is until they are asked to define it," LeDoux said. "There is in fact little consensus in psychology or neurology about what emotion is, and how it differs from other aspects of mind and behavior."

In truth, researchers tend to fake their understanding of emotions, LeDoux said. They depend on insights from personal experiences to determine that some mental states have certain ‘‘feelings’’ associated with them and others do not, which we call "emotions."

These shaky definitions are problematic even when just studying emotions in humans (who have 37 English words for feelings related to fear); these problems are compounded when we try to study human emotions in animals.

Instead of trying to compare animals and humans researchers should study the "survival circuits" behind behaviors. Studies in animals can find survival circuits universal to mammals, like fear and hunger.

"Survival phenomena are closely associated with emotions," LeDoux said. "We need to focus on a species' independent way of getting at these key functions."

Many different animals have very similar survival circuitry: for example, the brain regions that tell an animal to run away from a threat are the same even if that animal runs on two legs, four legs or takes flight.

"These areas are organized similarly in spite of the fact that they control different behavioral responses in different species," LeDoux said. "These are more related to motivation. The line between emotion and motivation is very thin: when you are in a emotional state you are motivated."

This leads to differences in behavior and how we perceive our own feelings and emotions. "Feelings are important but they need to be studied in humans," LeDoux said. "These survival functions are not about creating feelings. They are about controlling interactions with environment."

An article explaining LeDoux's rethinking of the emotional brain appeared online in the Feb. 23 issue of the journal Neuron.