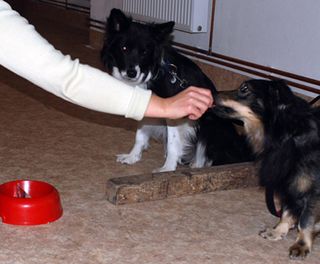 The subject is following closely that the partner is receiving a food reward for its action.
(Image: © Friederike Range)

Like their human owners, dogs can feel the bite of the green monster of envy, a new study suggests, though their envy comes in a simpler form than what we and our primate cousins feel.

Envy is a well-known emotion in humans. And studies in some of our closest genetic relatives, including chimpanzees (Pan troglodytes) and capuchin monkeys (Cebus apella), show that they too feel envy when they feel they have been rewarded unequally for their efforts. For example, a chimp asked to perform a task will eventually stop cooperating if his or her partner gets a tastier treat as a reward for performing the same task.

Researchers think envy could have been crucial to the evolution of cooperation, something we primates excel at. If an individual balks at receiving a lesser reward, that behavior would increase his or her relative fitness compared to those who simply accept what they are given, so the thinking goes.

Friederike Range of the University of Vienna in Austria and her colleagues wondered if other animals that engage in cooperative behavior might exhibit simple forms of envy. To test this, they turned to canids (a biological group that includes domestic dogs and their wild cousins, such as wolves and coyotes), which are known to hunt and rear their pups cooperatively. Domestic dogs also cooperate while interacting with humans.

For the experiments, Range and her team took domestic dogs and paired them up, asking each to perform a task — in this case commanding them to place their paw in an experimenter's hand — for which they received a reward. They would either get a "high quality" reward (sausage) or a "low quality" one (brown bread).

When their partner was rewarded with brown bread, but they got nothing, dogs stopped offering their paw much sooner than in any of the other reward situations. They also became much more agitated, scratching themselves, yawning, licking their mouth and avoiding the gaze of their better-rewarded partner. They also stopped obeying the command much sooner than when they were alone and not given a reward.

The results of the experiments, detailed in the Dec. 8 issue of the journal Proceedings of the National Academy of Sciences, "provide evidence for the presence of sensitivity toward an unequal reward distribution in a non-primate species," the authors wrote, though "in contrast to primates, the dogs never rejected food … so there is a fundamental difference in the behavior of the primates and the dogs."

These experiments may help shed light on how far back in the evolution of animals envy arose and raise the question as to whether it is an emotion only present in primate and domesticated animals that work directly with humans or whether it would show up in other social animals as well.

"I would think that other cooperative species might also show such emotions," Range told LiveScience in an e-mail.

Editor's Note: This story has been revised to reflect how dogs continued to give their paw longer in a situation where they were alone.