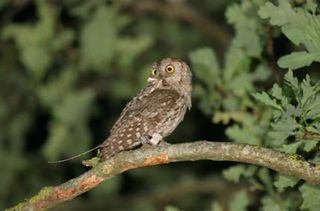 Male scops owl holding a captured moth in its beak. Males are ringed (on the left tarsus) and equipped with VHF transmitters (on the right tarsus) for identification and localization.
(Image: © Jacques Auger)

The bigger the owl, the deeper its hoot. And that can be grounds for a big bird fight. Male owls with the best territories attract the best females. Before any flapping and jabbing begins, however, the males often hoot at each other. Males use the information coded in the tone of a rival’s hoot to judge whether or not to initiate a fight over territory, new research shows. Loïc Hardouin and his colleagues wondered whether owls might use their hoots to boast about their physique, so they analyzed the calls of 17 male scops owls located on the Isle of Oléron, west of France, and compared hoots to body type. They found that the body weight of the owls was closely linked to the pitches of their hoots—heavier owls made lower hoots. Since heavier owls are better fed and have more stored energy, they should be more of a threat to other males than lighter owls with higher hoots, reasoned Hardouin, currently a behavioral ecologist at the University of Sussex in England. To find out of this was true, Hardouin and his team recorded owl hoots and toyed with the recordings so that they sounded like they came from owls that were lighter and heavier than they actually were. When the recordings were played, owls responded more cautiously if the hoots sounded like they came from bigger owls and more aggressively if they resembled hoots from smaller owls. Some males even know how to lower their hoots slightly, Hardouin said, to make them sound bigger than they really are. This deceptive behavior has never been observed in birds before, he said. The results are published in the April issue of The American Naturalist. The owls obviously understood that hoots are indicative of physical condition and used this information to decide how best to respond, said Peter McGregor, a zoologist at Cornwall College in England who was not involved in the study.