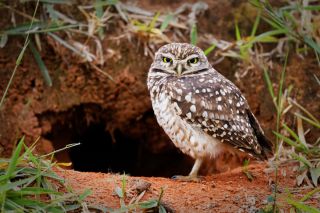 A small burrowing owl lines its underground nest with the poop of other animals to lure insects and other prey, a new study suggests.

Burrowing owls (Athene cunicularia) are about 8 inches (20 centimeters) tall and are found from Canada to Chile. Unlike most owls that nest in trees, the burrowing owls lives underground, digging their own burrows or taking over burrows dug by other animals, such as prairie dogs and pocket gophers.

The owls are also unusual in that they are active during the day, live in colonies, and line their nests with large clumps of fecal matter, which they collect from cows, horses, dogs and other mammals. [In Photos: Birds of Prey]

A burrowing owl's nest can extend 10 feet (3 meters) underground, making the smelly task very labor intensive for the bird, so scientists have long wondered why they do it.

The new study, conducted by Matthew Smith and Courtney Conway of the University of Arizona, ruled out two popular hypotheses. One purported the owls used dung to mask the scent of their eggs and nestlings from snakes, raccoons and other predators. However, results from the study show that dung-lined nests were just as likely to be plundered as unlined ones.

The researchers also debunked the idea that males used the poop to attract mates to their nests, by showing that male owls collected the stuff after, not before, pairing up with a female.

To test a prey-attraction hypothesis, the researchers set up 450 plastic cups containing a clear plastic funnel and soapy water to snare insects. Some of the traps were lined with dung, while others were not. Traps with dung had about 69 percent more insect biomass than traps sans poop.

The results are in agreement with another study, conducted by University of Florida researchers and published in 2004, which showed that owls living in poop-lined burrows consumed 10 times more dung beetles than owls living in better smelling burrows. That study likewise found that the scatalogical tactic did not affect whether or not a nest was targeted by predators.

The new study also tested a fourth hypothesis, that male owls used dung to let other owls know their burrows were occupied, thereby reducing conflict between owls. The new findings found that owls were less likely to move into a dung-lined burrow, but the results were not statistically significant.

The researchers suggest the owls might be using the method to lure in insect prey and to signal to other owls that a burrow is taken.

"Prey attraction and occupancy signaling are not mutually exclusive functions," they write in an upcoming issue of the journal Animal Behavior. "Perhaps the habit of scattering materials initially evolved to signal occupancy, and the use of manure in this regard provided an added benefit (attracting prey to the nest)."