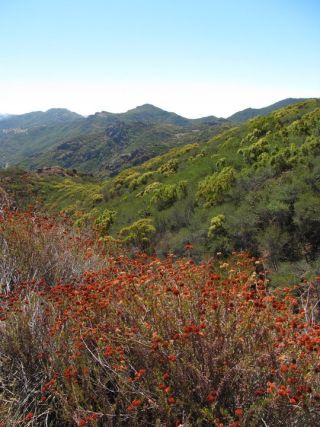 The fracture that caused the earthquake was not on a significant fault and is unlikely to be a new source of major earthquakes, said Caltech seismologist Egill Hauksson. (An earthquake is a sudden movement that releases stored energy on a fault.) Instead, the break likely is a bit player in California's tectonic drama, a minor crack in tortured crust being squeezed between two tectonic plates. There are thousands of small, unnamed faults in Southern California.

"In Southern California you can have an earthquake anywhere," Hauksson told Live Science's Our Amazing Planet. "What's important is the plate boundary here is complex and this small earthquake is a minute part of that."

Because the earthquake did not rupture the ground and slipped less than a mile (1.6 kilometers), geologists may never pin the shaking on a specific fault, said Robert Graves, a research scientist with the U.S. Geological Survey.

The epicenter of yesterday's magnitude-4.4 earthquake, dubbed the "Shamrock Shake" by some Angelenos, falls in a belt of seismicity that stretches from north of the Santa Monica Mountains south toward Los Angeles. The 6:25 a.m. quake was centered in Encino at a depth of 6.1 miles (9.9 km). The line of earthquakes that includes the Shamrock Shake sits between several major fault zones, including the Santa Monica Fault and the Sierra Madre Fault.

The quake may have relieved stress accumulating since the magnitude-6.7 Northridge earthquake rattled the city in 1994, Hauksson said. Yesterday's earthquake was west of the Northridge quake epicenter. [In Photos: Northridge Earthquake 20th Anniversary]

"It's possible that this is some minor readjustment in the crust, because of the Northridge earthquake," Hauksson said.

But the moderate earthquake, which was 900 times weaker than the Northridge quake, might also have alleviated squeezing caused by the San Andreas Fault's big bend, Hauksson said. Where the San Andreas Fault kinks, the Pacific Plate and the North America Plate push together instead of sliding past one another, as they do elsewhere along the major fault. The compression creates hundreds of faults in Southern California and pushes up the spectacular mountain ranges that ring Los Angeles, including the Santa Monica Mountains and the San Gabriel Mountains.