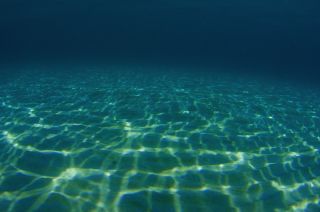 The sandy bottom of a shallow part of the ocean, off the coast of Florida.
(Image: © Seafloor photo via Shutterstock)

Just like humans, organisms that live in the oceans need vitamins to stay healthy, but the sources of these underwater vitamins are not always easy for scientists to identify.

Researchers have now shown that B12 vitamins in the ocean are produced by archaea, a group of single-celled organisms, not only by marine bacteria, as was previously thought. The findings may help scientists better understand the growth of tiny photosynthetic creatures called phytoplankton and, consequently, the regulation of carbon dioxide levels in the atmosphere (because the ocean absorbs some of that carbon dioxide).

"It is not until our work now that we have demonstrated that archaea actually do make the vitamins, and we are measuring how much they make in cultures," said study author Anitra Ingalls, a professor of oceanography at the University of Washington.

"For a long time, people have known that both bacteria and archaea are the only organisms on Earth that can make B vitamins," Ingalls said. "And for a long time, we never knew that there were archaea living in the ocean."

In the early 1990s, researchers discovered that archaea were present in the ocean, and at the beginning of the 21st century, they found that these organisms were abundant there, she said.

"Understanding the source of B12 in the ocean — knowing who is making it — can allow us to understand who might actually be getting the B12, and where they might be supplying it," Ingalls told Live Science.

This is particularly important when it comes to the growth of phytoplankton, which use photosynthesis to make energy, as plants do, and are the foundation of the ocean food chain. These tiny creatures play an important role in regulating the amount of carbon dioxide in the atmosphere, Ingalls said. "You can think of them [phytoplankton] as the forest of the ocean," she added.

And, in order to grow, phytoplankton need vitamin B12.

"So the community of phytoplankton and their ability to fix carbon dioxide is partly dependent on the availability of B vitamins," Ingalls said.

If there are not enough B vitamins in the water, the phytoplankton can't extract carbon dioxide from the water, so carbon dioxide will go back into the atmosphere, she said. "Or, it won't be drawn down in the first place," Ingalls said.

"Oceanographers spend a great deal of time trying to understand what [plankton] communities lead to the greatest draw-down of carbon dioxide, and we know that plankton are limited by the availability of nutrients," she said.