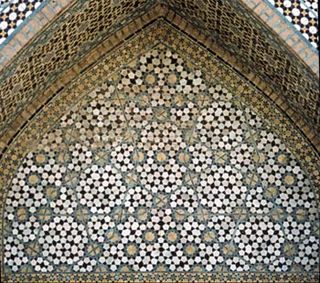 The swirling Arabesque ceramic tiles used in medieval Islamic mosaics and architecture were produced using geometry not understood in the West until the 1970s, a new study suggests.

The inlaid patterned tiles grace the walls of many structures worldwide, in patterns of mind-boggling intricacy called "girih." Historians have always assumed that medieval architects meticulously developed the patterns with basic tools.

But manuals written by the architects to share tricks of the trade actually include model tiles—like geometrical tracings—that helped lay out the complex "girih" designs [image] on a large scale, researchers discovered recently. The efficient system eventually allowed artisans to produce "quasicrystalline" wall patterns—a concept that was discovered by Western mathematicians just three decades ago.

"I compare the manual to a crib sheet of expert tips, from master to master," said Peter J. Lu, a Ph.D. candidate at Harvard University and co-author of the new study.

Polygons needed to be perfect

Most mosaic tile walls in medieval Islamic buildings are based on a polygon and star pattern, with lines atop them creating a zip-zag look [image]. Since polygons don't fit together properly without near-perfect symmetry, it would have been very challenging to make the patterns look right, historians say, but they assumed a basic straight-edge and compass were used to get the job done.

Lu's investigation of buildings and texts from throughout the Islamic world suggests the artisans had a better system.

He found 13th-century architectural scrolls from Iran, Iraq, Turkey and Afghanistan, among other predominantly Islamic countries, that contain diagrams of five different polygon shapes that artisans shared as standard models.

"Nothing written in there was an accident," Lu told LiveScience. "There is direct historical evidence for the use of these scrolls, and that allowed for a wide range of use."

The scrolls explain why designs mimic each other across the Middle East, Lu said. "The fact that we can explain so many sets of tilings, from such a wide range of architectural structures throughout the Islamic world, with the same set of tiles makes this an incredibly interesting universal picture," he said.

When architects started using the model "girih tiles", as Lu calls them, the work of architects across the region became faster and easier because they were able to get the shapes bang on every time.

It also became easier to make more complicated patterns, Lu said. By 1453, architects had started designing walls with perfectly overlapping quasicrystalline tiles. Quasicrystalline patterns never repeat, but are completely symmetrical. A dizzying example is on display at its medieval best at the Darb-i Imam shrine in Iran.

The full study appears in the upcoming issue of the journal Science, and is co-authored by Paul J. Steinhardt of Princeton University.