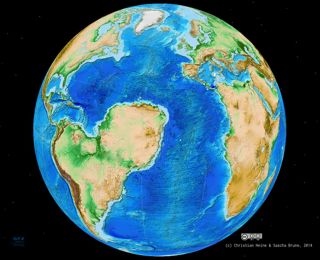 A hypothetical model of the Atlantic Ocean if Africa had split into two parts along the West African Rift system.
(Image: © Sascha Brune/Christian Heine)

South America nearly carried off Northwest Africa when the world's last supercontinent fell apart 130 million years ago. Now, a new model helps explain why the Sahara settled east of the Atlantic instead of sailing off with South America — it's all about the angles.

Back before the Atlantic Ocean formed, Africa and South America nestled together in a massive supercontinent called Gondwana. When this landmass started to split, gashes in Earth's crust called rifts opened up along pre-existing weaknesses.

One of these gashes, called the West Africa Rift System, started to tear apart the future Sahara desert. Two more rifts formed along the future boundaries of South America and Africa. Imagine three rift zones, two lined up essentially north-south and one pointing east-west. These alignments are key to explaining why the continents broke apart the way they did, according to a study published March 6 in the journal Geology.

The planet's plate tectonic forces could more easily pull apart the two continents at the east-west–oriented rift than at the north-south–oriented rift in the Sahara desert, the researchers found.

"The direction in which the continents break apart heavily influences the success of the rift system," said study co-author Sascha Brune, a geophysicist at GFZ Potsdam in Germany. "Because the rift system was at a very low angle to the extension direction, this rift won out in the end," he told Live Science's Our Amazing Planet.

At that time, South America was heading westward. "Plates are pulled apart by large-scale geological forces that come from the plate boundary or the mantle, but for the rift, it's not important where these forces come from," Brune said. "If you pull more in the direction of the rift, you need two times less force to get the rift going." The mantle is the hotter layer of rock beneath Earth's crust.

The crust often breaks apart at three-pronged junctions, such as the triple rift that formed between Africa-South America, and it's not uncommon for one rift to fail to develop. The model developed by Brune and his co-authors suggests that the angle between the rift and the plate tectonic forces plays an important role in determining which rifts will fail.