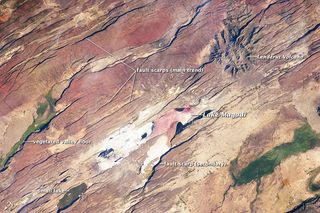 An astronaut aboard the International Space Station snapped this photo of the East African Rift, the spot where Earth's crust is ripping apart and where a trove of early human ancestor fossils have beenf found.
(Image: © NASA)

In the cradle of human evolution, over a region stretching across Ethiopia, Kenya, Uganda and Tanzania, the Earth is pulling apart in what is called the East African Rift. A new astronaut image showcases the unique geologic features of this active area.

The rift is the area where the Somalian and Nubian tectonic plates are pulling away from the Arabian plate, a process that began tens of millions of years ago and in tens of millions years more will result in the formation of a new ocean. The area is rich in fossils of the hominid ancestors of modern humans, including the famous 3.2-million-year-old "Lucy" skeleton, the earliest known adult hominid.

The pulling apart of the crust makes the region a geologically active one, with features from long linear cuts in the crust to volcanoes. An astronaut aboard the International Space Station snapped an image of these features along the Eastern Branch of the rift, near the southern border of Kenya. (The image is oriented so that north is to the lower left.)

The most striking features in the image are the linear fault lines that run parallel to each other along the floor of the tectonic rift valley. From the point of view of the ISS, the late afternoon sun casts shadows that make these fault scarps, as they are called, more prominent. The scarps are caused by slip motion along individual faults and are aligned with the north-south axis of the valley (lower left to top right). [See astronaut's image of rift valley .]

The arid climate of the Eastern Branch can be seen in the red, salt-loving algae present in Lake Magadi, a shallow and salty lake at the center of the image. The white salt deposits on the dry part of the Lake Magadi floor host a few small commercial salt pans.

By contrast, the Western Branch, which runs in a giant arc from Uganda to Malawi, lies on the border of the Congolese rainforest.

It was previously thought that the Western Branch was much younger than the Eastern Branch, but new research suggests that the two branches of the rift valley are actually about the same age.

The East African rift system is marked by substantial volcanic activity, including lavas erupted from fissures along the rift in the region. Much of the faulting observed in this image cuts through such lavas.

Individual volcanoes also dot the landscape of the rift, including Mount Kilimanjaro and Mount Kenya. In the image the astronaut captured, Lenderut volcano can be seen superimposed on the faults, indicating it is a younger feature than they are. The highly eroded slopes suggest the volcano has been dormant for quite some time.

The largest area of vegetation in the image, which measures about 10.5 miles (17 kilometers) long is the greed floor of a valley that drains an area large enough for water to exist near the surface.