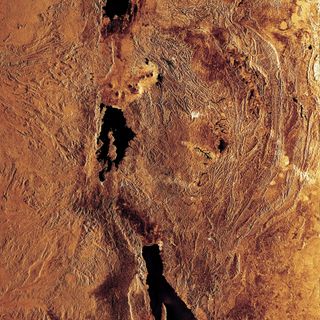 Twenty-five million years ago, as plate tectonics began to pull apart eastern Africa, the landscape that would eventually be home to the first humans began to take shape.

Now, new research says that landscape — and its lakes, rivers and climate — may have looked quite different than scientists thought.

The East African Rift Valley, as the region is known, formed where the Somalian and Nubian plates are pulling away from the Arabian Plate. The eastern branch of the rift passes through Ethiopia and Kenya, and the western branch forms a giant arc from Uganda to Malawi.

"We now believe that the western portion of the rift formed about 25 million years ago, and is approximately as old as the eastern part, instead of much younger as other studies have maintained," said Michael Gottfried, a geologist at Michigan State University who co-authored the study.

"East Africa is traditionally where researchers go to try to understand the evolution of primates and, eventually, humans," Gottfried told OurAmazingPlanet. "We're looking at how the landscapes and environments in Africa changed during the run-up to human evolution."

Rifting in the western branch 25 million years ago dramatically changed how rivers flowed, where lakes formed and even the region's climate patterns.

Geological evidence points to alternating wet and dry seasons, and major rivers that flowed from south to north, Gottfried said. These rivers likely drained into a large lake in the center of the continent — Gottfried and his colleagues call it Paleo-lake Congo — which no longer exists.

To piece together the story, Gottfried and his colleagues, including Nancy Stevens, a paleontologist from Ohio University, collected rock samples, zircons (a rare crystalline mineral that can be used to pinpoint geological ages) and fossils, which they correlated with similar specimens from other regions to determine the ages of the rocks encasing them.

"We kind of think of that period of time as a transitional period," he added.