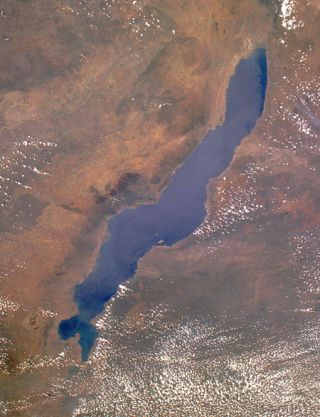 Lake Malawi in Africa, photographed by astronauts aboard the space shuttle.
(Image: © NASA)

A drastic shift in the tropical African climate many thousands of years ago may have given a significant push to early human evolution, a new study says.

Before about 70,000 years ago, the climate in parts of Africa was wildly variable, with extreme droughts occasionally completely drying up lakes and killing off many plant and animal populations.

But after that time, the climate stabilized and became wetter, allowing lake levels to rise dramatically. It was around this same time that early human populations in Africa grew rapidly and began to migrate.

"The population expansion and subsequent spreading of 'Out of Africa' human colonizers may have been aided by the newly stabilized climate," said study team leader Christopher Scholz of Syracuse University in New York.

The team used cores of sediments taken from Africa's Lake Malawi (as part of the National Science Foundation's Lake Malawi Drilling Project) to shed light on past climate changes in the area. Lake Malawi is located on the southern end of East Africa's Rift Valley, between Mozambique, Malawi and Tanzania.

The lake cores showed that megadroughts plagued parts of tropical Africa over the last million years, with lake levels sometimes dipping below 15 percent of the current level. But around 70,000 years ago, lake levels rose dramatically.

"The sediment cores from Lake Malawi are the longest continuous record of climate change available from the continental tropics," said NSF program director Paul Filmer, who wasn't directly involved with the research. "The link between the signals of East African moisture levels in core samples from the lake and a critical stage in human evolution is an important discovery."