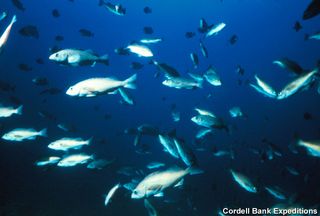 Fish use a row of specialized sensory organs along the sides of their bodies, called lateral lines, to hunt for prey, alert them of predators, and aid in synchronized school swimming.

Now scientists have developed a lateral line for submaries.

"Our development of an artificial lateral line is aimed at enhancing human ability to detect, navigate and survive in the underwater environment," said Chang Liu, a professor of electrical and computer engineering at University of Illinois at Urbana-Champaign. "Our goal is to develop an artificial device that mimics the functions and capabilities of the biological system."

Equipped with an artificial lateral line, a submarine or underwater robot could similarly detect and track moving underwater targets and avoid collisions with moving or stationary objects, Liu and colleauges say.

The device is made of micro-fabricated flow sensors. They can detect the hydrodynamic wake formed behind a propeller-driven submarine.

"By detecting changes in water pressure and movement, the device can supplement sonar and vision systems in submarines and underwater robots," Liu said.

The research, announced today, was detailed in the Dec. 12 issue of the Proceedings of the National Academy of Sciences. It was funded by the U.S. Air Force Office of Scientific Research and by the Defense Advanced Research Projects Agency (DARPA).

"Although biology remains far superior to human engineering, having a man-made parallel of the biological system allows us to learn much about both basic science and engineering," Liu said. "To actively learn from biology at the molecular, cellular, tissue and organism level is still the bigger picture."