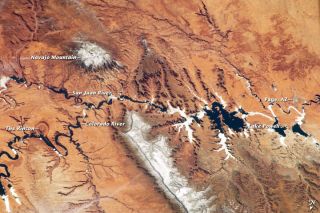 Since 1960, the Colorado river has not flowed regularly to the sea. While pockets of green remain, the Colorado delta is a parched and begging for relief. The dry, sandy channel glares in the bright sun, abandoned by the river that has been overtapped and overworked for too long.

It's hard not to think of the lost potential of an ecosystem that once thrived. After an adventure there in 1922, American author, scientist and environmentalist Aldo Leopold wrote:

"On the map, the delta was bisected by the river, but in fact the river was nowhere and everywhere, for he could not decide which of a hundred green lagoons offered the most pleasant and least speedy path to the Gulf [of California]."

The Colorado's delta was once a landscape of plenty, the basis of rural economic activity and local employment. Tourism, recreational hunting, sport and commercial fishing — all have been lost to overuse and over-exhaustion of a limited resource. [Man-Made Flood Could Help Revive Colorado River Wetlands ]

For decades, it seemed nothing could be done. I spent much of the past 15 years shining a spotlight on the sorry state of the Colorado river delta for audiences across the country. And while it's true that those conversations would quickly turn to the byzantine complexities of water law and the difficulties of caring for shared cross-border resources, it is also true that most people are truly unsettled by the reality that the Colorado stops short of its natural destination.

Today, U.S. and Mexican policymakers, water agencies and conservation organizations are taking a major step to right the wrong that has been done to the Colorado river delta. For the first time in history, the United States and Mexico will send a modest volume of water into the Colorado River delta in the form of a temporary "pulse flow," which will mimic the natural spring floods that once nourished the delta. Never before have we deliberately sent water below Morelos Dam — the last dam on the river just south of the U.S.-Mexico border — to benefit the environment.

Beginning this month, water from the Colorado river will literally pulse through the border as a sign to the rest of the world of what people can accomplish through cooperation between nations. It feels like a triumph of human optimism over acquiescence.

Some may grumble that this is not the time to send water to the environment, but that objection ignores the broader context of the recent binational agreement and the many benefits it brings to both countries. In addition to breathing life back into the delta, this new framework more broadly allows the United States and Mexico to share surpluses in times of plenty and reductions in times of drought, provides incentives for leaving water in storage, and conserves water through joint investments in projects from water users in both countries. These benefits extend to water users throughout the Colorado river basin — in all seven U.S. states feeding into the basin, and the two in Mexico.

By abandoning the old framework of "who gets what" and establishing cooperative management of our shared resource, the United States and Mexico are achieving benefits for communities and nature alike. With this kind of cooperation, I have renewed hope that in the not-so-distant future we will see delta ecosystems and economies thrive once again.