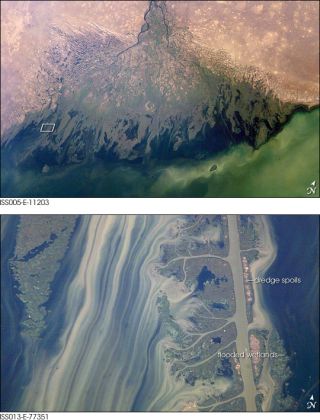 The river has built a tremendous delta that forms the northwestern shoreline of the Caspian Sea.
(Image: © NASA.)

The Volga River drains much of western Russia’s industrial region as it travels southward to empty into the Caspian Sea. Over thousands of years, the river has built a tremendous delta that forms the northwestern shoreline of the Caspian Sea. The delta channels provide transportation between the heartland of Russia and the oil-rich Caspian Sea. The Volga’s extensive distributaries (branches to the sea) harbor habitat and rich fishing grounds for Russia’s famous beluga sturgeon, the source of beluga caviar. The delta’s wetlands, parts of which are designated as the Astrakhanskiy Biosphere Reserve, are important stopping points and breeding grounds for migrating water birds.

The detailed astronaut photograph (lower) zooms in on a shipping channel in the western part of the delta (location is indicated by a white rectangle on the wide view). The straight channel is periodically dredged, and the dredged material is piled along the edge of the channel in mounds. Surrounding wetlands are partially inundated. Flood waters with muddy sediment stream from the distributaries along the channel, producing long streamers. This image was taken a few days after heavy rains in early September 2006 flooded parts of Russia to the north, and it captures the flood waters emptying into the Caspian Sea. Since 1978, the Caspian Sea level has risen over 2 meters (a little over 6 feet), submerging valuable wetland habitats, flooding coastlines, agricultural land, and industrial infrastructure. It has become a struggle for the nations surrounding the Caspian to maintain channels and coastal developments and to preserve natural marine and land habitats. Shallow coastlines like the Volga delta are particularly vulnerable to rising sea levels.