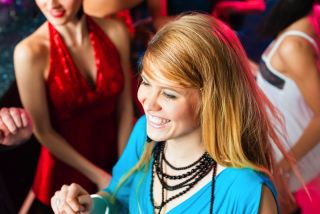 A woman dances in a club. New research suggests that aggressive and persistant sexual advances are the norm in bar environments.
(Image: © Kzenon, Shutterstock)

In the song "Blurred Lines," Robin Thicke croons, "I hate these blurred lines/ I know you want it." In reality, the lines in the club scene Thicke sings about aren't so blurred at all.

In a new study, researchers find that in one-third of cases where men initiated unwanted sexual contact with women in bars and clubs, the advances were obviously unwelcome. In the other two-thirds of cases, there was some chance the men had misinterpreted the women's cold-shoulder behavior as inviting, but independent observers still suspected the guys knew better.

The behaviors ranged from cat-calling to sudden groping or grinding against women, typically by complete strangers, said study researcher Kathryn Graham, a seniorscientist at the Center for Addiction and Mental Health at the University of Toronto.

"If that happened in a subway or at a university cafeteria or something, they'd call the police or people would have consequences," Graham told Live Science. "But somehow, in bars it's become very normative, and guys are able to get away with doing this sort of thing. " [Busted! 6 Gender Myths in the Bedroom & Beyond]

Graham and her colleagues were originally researching a program meant to prevent general violence and aggression in bars in Toronto. As part of that program evaluation, they sent 148 trained observers into the night. In pairs, these observers visited 118 bars and clubs on Fridays and Saturdays. Over 1,334 total visits, they recorded 1,057 incidents of aggression ranging from angry words to all-out brawls.

In the course of analyzing the data, the researchers noticed that 258, or 25 percent, of these aggressive encounters, were sexual in nature. They decided to take a closer look at what the observers had recorded.

The researchers were interested in whether men were intentionally harassing women, or whether they were simply confused about female signals (as one 2008 study suggests is all too common for some young men).

They found that in 34 percent of those cases, it was beyond clear that the women didn't want to be groped, yelled at or otherwise targeted. For example, in one case, a man and a woman were on the dance floor when he suddenly moved in close and grabbed her butt with both hands. She pushed him away immediately, and he looked at his male friend and laughed. Ten seconds later, he grabbed her breasts. She pushed him away harder as the guys laughed again. She then headed to another area of the dance floor.

"For about a third of them, it was clearly intentional aggression," Graham said. "When you walk through a bar and grab a woman's breast and keep on walking, it's not some sort of misperception that she wants him to do that." [51 Surprising Facts About Sex]

Even in the remaining two-thirds of cases where the observers could not definitively infer aggressive intent, they almost always agreed that the man probably knew that what he was doing was unwelcome.

Examples included a man slapping a woman's behind, a man touching his mouth to a strange woman's hair, and a man coming up behind a server and encircling her waist with his hands, trying to follow as she rushed away.

The reason for all of this unwanted groping is likely cultural in part, Graham said. Pop culture, including songs like Thicke's, suggest women aren't allowed to say no, and if they do, they secretly want sexual advances anyway. Bars are staffed mostly by male bouncers, many of whom hold these beliefs, too, Graham said. In only one case out of 258 observed was the male initiator ejected from the bar.

More often, bystanders encouraged bad behavior rather than stopping it, the researchers found.

"A lot of times, it's done for the amusement of their friends," Graham said of the groping and cat-calling. "So it's a group of guys, and they're harassing women. They're not thinking about what is happening to the women, they're just thinking about amusing their friends."

In a few cases, she said, the men appear to be predators "getting their kicks by making women feel very uncomfortable," Graham said — for example, a man who came up to two women dancing and ground his crotch into one of them, only to turn around and do the same to the other when her friend moved away.

"We had persistence to the point where women had to leave the bar altogether to get away from somebody," Graham said.

In a follow-up study, the researchers issued surveys to people leaving bars in Windsor, Ontario, across the Detroit River from Detroit. They found that 50 percent of women reported unwanted sexual contact that very night, suggesting the problem is widespread. The researchers reported their findings today (March 3) in the journal Alcoholism: Clinical and Experimental Research.