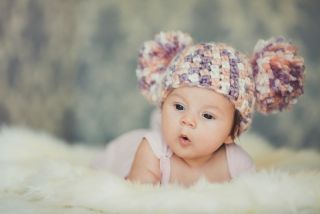 Melodius girl names such as Sophia, Emma and Olivia are all currently popular.
(Image: © GTeam, Shutterstock)

Where did all these Jacobs and Sophias come from? Maybe Alaska and Rhode Island.

A new interactive graphic shows the ebb and flow of baby name popularity over time. Enter a name and watch a U.S. map scroll through nearly a century of baby-name data to see when names caught on, and how they spread.

Creator Brian Rowe used census data to show the prevalence of more than 29,000 baby names across the country, state-by-state. Jacob, the most popular name for boys as of 2012, starts out strong in Alaska in 1917 and remains fairly constant throughout the country until the 1970s, when it catches on out West and spreads. [List of Top 10 Girl and Boy Names and Where They Caught On]

Sophia, the No. 1 name for girls, takes off in the late 1990s, with Rhode Island leading the pack in proportion of girls with this name. Other names are newbies: Neveah, which is "heaven" spelled backwards and often tops lists of most-hated baby names, doesn't appear on Census records until 2001. The name appears strangely popular in New Mexico beginning in that year.

The West is known for broader acceptance of unique baby names, and cowboy-esque monikers show a clear regional distinction. The name Gunner, for example, shows up in stronger proportions in Oklahoma, Kansas and Nebraska in the early 2000s before moving into the Dakotas, Wyoming and Montana. Unsurprisingly, you won't run into too many Gunners in New York or Vermont.

In a blog post about the map, Rowe points out interesting regional clustering, such as the popularity of the name Terrence in the Midwest in the 1940s and 1950s. In the 1980s, fewer Midwesterners went by Terrence, but the South had picked up the name.

Rowe is far from the first data-driven person to get interested in baby names. Researchers have found that though baby names are free from direct marketing influences, they signal taste, class and even political ideology, likely unconsciously. A study presented in 2012 at the Midwestern Political Science Association annual meeting in Chicago, for example, showed that parents in liberal neighborhoods are drawn to soft-sounding "L" names such as Liam, while parents in conservative neighborhoods more often choose names that feature hard consonants such as Kurt or Piper.

Nearly everyone wants unique baby names, and baby names are becoming more diverse over time. The ideology study found differences in how high- and low-income parents went about seeking this diversity, however. Lower-income parents were more likely to make up names or to get creative with spellings of common names. Higher-income parents, on average, sought out established but obscure names, like Archimedes.