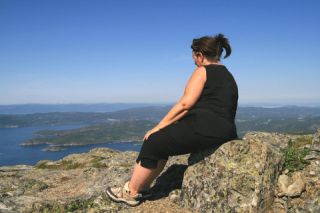 Certain microbes that line the intestines, detectable on the breath may contribute to excessive weight gain, researchers find.
(Image: © Dreamstime)

Weight gain could be the result of snowball effect, new research shows, with a stint of inactivity leading to a few extra pounds, which then makes it harder to engage in physically activity. This produces a vicious cycle, two studies on inactivity published in the journal Mayo Clinic Proceedings show.

The first study, published in December, found that obese people engage in less than one minute of vigorous activity per day, on average, and that the typical American sleeps and sits through nearly the entire day.

A second study, slated for publication, has found that Americans now expend several hundred fewer calories daily compared with the number they burned in the 1960s, a trend particularly acute among stay-at-home moms, according to the researchers. For example, mothers who stay home with young children today spend about 14 hours less per week doing physical activity than they did in 1965, the study found.

Previous studies on inactivity and obesity have included data gathered by people's self-reports, Archer said, with participants relying on their memory (and their bias) to record how much TV they watch or exercise they get. [How Many Calories Am I Burning? (Infographic)]

To avoid this problem of (frequently inaccurate) self-reporting, Archer's team applied a new set of equations to health data collected between 2005 and 2006, based on more-accurate measures of energy expenditure using activity monitors and urine analysis, the "gold standards" of physical activity studies.

The work represents the first estimate of physical activity for a large, nationally representative population, a study that avoids the bias of self-reporting.

To the researchers' surprise, the findings showed that obese people do only marginally more physical activity than someone who is bedridden. And most do not engage in any vigorous activity, such as jogging, biking, hiking or briskly walking up stairs.

"As inactive people gain weight, they become more inactive, and as a consequence gain more weight," Archer told Live Science. "This becomes a vicious cycle that is starting at younger and younger ages."

Also among the researchers' findings:

Archer added that Americans of all ages are vulnerable to becoming inactive, and the weight gain that can result. Today's modern conveniences — the two-car family lifestyle, computer-based entertainment and shopping, escalators, elevators, myriad appliances and power tools, and even power windows on cars — all reduce people's energy expenditure.

"At one time, on a population level, it was only the elderly that were inactive enough to increase their adiposity," Archer said. Adiposity refers to adipose tissue, or body fat, and describes how fat an individual is. "But now, we drive our kids to school (and sit). They spend all day at a desk (and sit), come home and play video games and watch TV (and sit), and go to sleep. It is the 'sit-sit-sit-sleep' lifestyle that is literally killing the next generation," he told Live Science in an email.

While it may seem shocking that obese people get less than a minute of vigorous activity daily, if anything, the finding "makes sense," said Dr. James Sallis, a professor of medicine at the University of California, San Diego, who was not involved with the study.

"It is hard for obese people to do vigorous [activity] because they have to work much harder to move their bodies around than a thin person," Sallis said. "There is good evidence that doing vigorous activity is much more effective at promoting fat loss than moderate-intensity activity. But it is hard to get them to do it."

Archer stressed that the new findings represent averages. Clearly, there are obese people who exercise and have active lifestyles, and thin people who are not exercising.

Nevertheless, the association between inactivity and obesity jumps out of the data, Archer said, and the data reveal that inactivity is a greater risk factor for obesity than any diet type is.