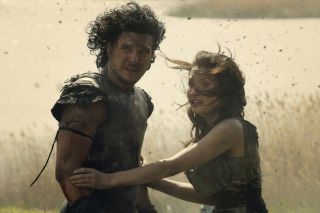 As flaming balls of lava and ash rain down on the streets of Pompeii, the renegade gladiator Milo gallops on horseback after a chariot ridden by his beloved Cassia, who has been kidnapped by an evil Roman senator. Meanwhile, a massive tsunami floods the harbor, sending a ship careering through the city's streets.

The new 3D "Pompeii" movie, in theaters tomorrow (Feb. 21), provides a front-row seat to one of the worst catastrophes in history: the eruption of Mount Vesuvius in A.D. 79, which entombed the city and its residents in mammoth mounds of volcanic ash.

Excepting the lava bombs and titanic tsunami raging in Pompeii's harbor, the dramatic depiction of the historic and horrific disaster stays relatively true to reality, scientists say. In fact, laser technology and aerial photos (digitally enhanced) ensured an impressive recreation of the city of Pompeii, from the lavish villas down to the paving stones. [See Clip from POMPEII Movie]

The film, produced by TriStar Pictures, tells the fictional story of a slave-turned-gladiator named Milo (played by Kit Harington) who falls in love with the daughter of a wealthy merchant, Cassia (Emily Browning), and their struggle to escape a villainous Roman senator (Kiefer Sutherland) amid the devastation of Pompeii.

"Obviously, it's a movie, not a documentary," said the movie's director Paul Anderson, "but the story of Pompeii is so remarkable you don't need to embellish it."

The eruption of Mount Vesuvius buried Pompeii, Herculaneum and other surrounding cities in 13 to 20 feet (4 to 6 meters) of volcanic ash. Pliny the Younger witnessed the eruption from across the Bay of Naples, and recorded the destruction in a letter.

The movie's depiction of the eruption, loosely based on Pliny's description and artifacts collected from the site, realistically captured the earthquakes that preceded the eruption, the explosions and the pyroclastic flows of hot ash and gas that buried the city and its residents, according to Rosaly Lopes, a volcanologist at NASA's Jet Propulsion Laboratory in Pasadena, Calif. (Lopes was not a consultant on the film.)

The filmmakers captured the sequence of events — earthquakes, followed by explosions, and then ash flows — quite well, Lopes told Live Science. "It wasn't like suddenly it went bang and then they died," she said. [The 10 Biggest Earthquakes in History]

Although records suggest many people escaped before the city was destroyed, most of those who died were probably killed by heat shock from the pyroclastic flows, Lopes said. The flows entombed bodies, which later decomposed and left behind casts. When archaeologists excavated Pompeii, they filled these casts with plaster to produce the famous molds of people frozen in their dying poses.

But Anderson definitely took some artistic license. The film depicts lava bombs raining down on the city, but "that type of eruption didn't have lava bombs," Lopes said. If it had, the damage the bombs would have caused to the city would be evident.

The movie also depicts a giant tsunami surging into Pompeii's harbor, carrying a ship through the streets on a torrent of water. Studies suggest there may have been a small tsunami, Lopes said, but there is no evidence it was powerful enough to bring ships into the city.

The film's depiction of the city of Pompeii was fairly impressive, according to Sarah Yeomans, an archaeologist at USC who has spent much of her life studying the city (but was not a consultant on the film). As the film showed, Pompeii was a resort town for the Roman elite, and gladiator games were a big part of life.

The filmmakers used lidar, a laser remote-sensing technique, to re-create the city's topography on the set. The aerial shots of Pompeii in the movie were real helicopter shots with computer graphics projected over them, Anderson told Live Science.

The buildings, streets and items in the market were based on real ones preserved in the ash, while the characters' costumes were based on paintings and mosaics of real people.

"I thought Anderson did a pretty good job approximating what the city may have looked like," Yeomans told Live Science, praising the attention to details such as the raised paving stones in the streets and the political graffiti on the buildings. The amphitheater where the film's gladiator scenes take place was also well done, she said.

The film departed from historical record in its depiction of women, however. "Upper-class women would not have been roaming around the streets on their own, and would certainly not have been involved in political activities," Yeomans said — "nor would they have had bare arms and slits up their dresses."

However, the film reasonably depicted the tensions between citizens of Pompeii and the Roman government, she said. Rome annexed Pompeii in the first century B.C., and written accounts suggest that tensions persisted around the time of the eruption.

If Anderson has a message for audiences, it's that an event like Pompeii could happen again.

Anderson believes the film has relevance to a contemporary audience. "It speaks very much to the hubris of the human condition," he said.

Eruptions like the one that buried Pompeii have occurred throughout history, such as the 1883 eruption of Krakatoa or the 1980 eruption of Mount St. Helens. Mount Vesuvius erupted again in 1631, killing at least 3,000 people, and today, more than a million people live in the vicinity of the volcano.

Although the movie is fictional, it humanizes the disaster in a way that historical accounts don't, Yeomans said. "When you let yourself watch the movie, you make the human connection that these were real people in a real tragedy."