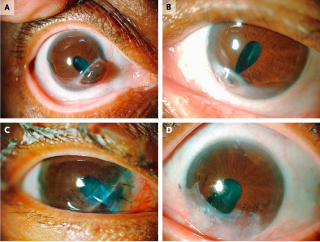 Images A and B show the patient's eyes with corneal melt. The images C and D show the eyes after surgical repair.
(Image: © The New England Journal of Medicine ©2014.)

A 61-year-old woman with rheumatoid arthritis suffered a serious repercussion of her condition: The irises of her eyes began to protrude, and she needed immediate surgery, according to a new report of her case.

In people with rheumatoid arthritis, which causes high levels of inflammation throughout the body, a condition called "corneal melt" can occur, the report said. The patient's own immune system attacks the area of the eye adjacent to the cornea, tearing the tissue and allowing the iris, which sits just behind the cornea, to slip out. The result is pupils that look quite irregular, according to the report, published today (Feb. 12) in the New England Journal of Medicine.

It is very rare for corneal melt to affect both eyes, said Dr. Mark Fromer, director of Fromer Eye Centers in New York City and an ophthalmologist at Lenox Hill Hospital. However, it's not rare for doctors to see torn corneas.

"It's quite common in the course of an ophthalmologist career to see a perforation, but it's not something you hear about every day," Fromer, who was not involved in the woman's case, told Live Science. [14 Oddest Medical Case Reports]

The condition generally happens in patients with long-standing rheumatoid arthritis. These patients often say they feel like they have something in their eye, and report a watery eye or vision impairment. However, they do not necessarily complain about pain, Fromer said.

To treat the condition, an eye surgeon may take a small piece of cornea and suture it to the area. Sometimes, the doctor may have to remove the conjunctiva (the outer lining of the eye) as well, because it brings the attacking cells to the cornea, Fromer said.

"The condition is very hard to cure," Fromer said. "Even if you transplant the cornea, it can happen again, because the systemic problem still exists."

In the case of this woman, surgeons sutured a graft on her eyes, and gave her medication to suppress the immune system, according to the report.

"Patient should be put on steroids and immune suppressants to reduce their aggressive immune response," Fromer said.

Rheumatoid arthritis is a systemic inflammatory disease that affects the body's joints, but it can also affect other organs. The causes of the disease are not fully known, but it is thought that a faulty immune response plays a role.

"People with rheumatoid disease often think about arthritis in the hands and the knees, but it's important to understand that rheumatoid arthritis can affect the eye as well, in a serious way," Fromer said.

People with rheumatoid disease or any autoimmune disorder should have their eyes checked regularly, preferably twice a year, Fromer said.

"With regular checkup, the condition can be detected earlier," he added. "Once the eye perforates, then it's a real emergency."