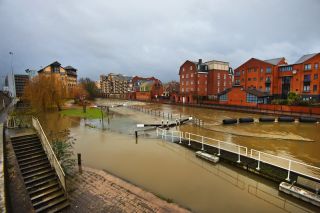 Flooding in Reading, England in 2014. The southern portions of the country have seen an extremely wet winter that has caused several rivers and streams to overtop their banks.
(Image: © 2014 England flooding photo via Shutterstock)

Across portions of the south of England, waves lap against the shores of lakes and ponds that used to be fields, as one of the wettest winters in U.K. history has dumped successive bouts of rain over the country, causing rivers to top their banks and inundate farms and towns.

And while a series of shifts in weather patterns across the globe seems to be causing the endless train of storms soaking the island, climate change may play a role in the current heavy downpours as well, said Dame Julia Slingo, the chief scientist of the country's official weather service, the MET Office, according to news reports.

Slingo said that since the beginning of the winter, the United Kingdom has experienced the "most exceptional period of rainfall in 248 years." She added that in the future, rising sea levels would cause more trouble in dealing with floods.

"In a nutshell, while there is no definitive answer for the current weather patterns that we have seen, all the evidence suggests that climate change has a role to play in it,” she said, addressing journalists at a recent press briefing in London.

Slingo added that there was "no evidence to counter the basic premise that a warmer world will lead to more intense daily and hourly heavy rain events."

Since December, there have been more than 130 severe flood warnings issued in the United Kingdom — compared to only nine in 2012. And so far, more than 5,000 properties have been flooded, the BBC reported.

The U.K. Centre of Ecology and Hydrology has put together a report on the recent events, according to which "perturbations" in the North Atlantic and Pacific jet streams, partly emanating from changing weather patterns in Southeast Asia and "associated with higher-than-normal ocean temperatures in that region," could be a factor in the extreme weather in Europe and North America. That extreme weather includes Arctic air that has repeatedly plunged into the eastern portions of the United States.

Although the United Kingdom is used to rainy winters, the duration of the rainfall and the intensity and height of coastal waves is "very unusual," Slingo told reporters. "We have records going back to 1766, and we have nothing like this. We have seen some exceptional weather. We can't say it is unprecedented, but it is exceptional." [6 Unexpected Effects of Climate Change]

Corinne Le Quere, a climate scientist at the University of East Anglia in Norwich, England, agreed.

An "increase in heavy precipitation that falls very intensely is a projection of a warming climate," she told Live Science. "As climate warms, you have more evaporation and more heavy rainfall — you're just having an accelerated water cycle."

A number of studies show that heavy rainfall has been increasing in the United Kingdom over the past 50 years, Le Quere said. "A connection with climate change hasn't been made formally in the U.K., but the trend is in the observation, and the expectation is in the understanding of the way the climate is going to respond to the increase in greenhouse gases.”

The fact that Arctic sea ice is melting is also causing other changes in weather patterns, she added. As the sea ice melts, the ocean can absorb more heat in the summer and potentially release more to the atmosphere in the fall and winter, which in turn influences atmosphere pressure over the area. Differences in pressure in the atmosphere are what drive the planet's weather and create the patterns that guide storms.

However, Le Quere warned that, at the moment, it was impossible to say for sure if global warming triggered the floods in the United Kingdom, because many other factors were also at play, such as whether there were a lot of properties in flood plains. "There should be a formal analysis of the events. But we can say that there is an anticipated connection between climate change and heavy rainfall," she said.

And it is likely that in the future climate change will drive even more heavy rainfall and lead to more floods in the United Kingdom, Le Quere added.