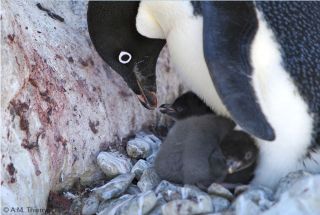 The team found that the adults treated with a stress hormone were more likely to lose one of their two chicks due to predation or other unknown factors, compared to untreated adults.
(Image: © Copyright A.M. Thierry)

Stress induced by changes in Antarctic sea ice may cause adult male Adélie penguins to be less attentive to their chicks, and may increase chick mortality, according to a new study.

A certain degree of stress and the related release of hormones can benefit penguins and other animals by increasing alertness and reallocating energy reserves to react to stressors. But chronic stress can produce negative effects in an individual's health and behavior, and can jeopardize a parent's ability to care for its young.

Adélie penguins — medium-size cousins of emperor penguins common along much of the Antarctic coastline — spend lots of time on sea ice searching for the krill that they feed on in the water below. In recent years, changes in the distribution of sea ice have forced the penguins to travel farther and expend more energy while hunting for krill than they have in the past [Images: Adélie penguins Cope with Changing Sea Ice Conditions].

As the distribution of sea ice is projected to continue to change throughout the century as climate change progresses, researchers based at the University of Strasbourg in France were interested in determining how this environmental stress may impact the future population of Adélies on the southernmost continent. The team traveled down to the eastern coast of Antarctica to observe a colony during a breeding season, from mid-November 2009 through mid-February 2010, and captured and treated 10 adult males with pellets containing corticosterone, a stress hormone common in birds. The team also handled, but did not treat, 10 additional adult males, to serve as controls for the experiment.

The pellets released the hormone steadily over the course of three weeks until they degraded completely within the penguins' bodies. The researchers observed the penguins throughout those three weeks, and for several weeks afterward, to determine the full extent of the hormone's effects.

Males treated with the pellets spent less time foraging and more time at their nests, but were less attentive to their chicks while at their nests, compared to untreated adult males, the team reported in the Feb. 4 online issue of the journal Behavioral Ecology and Sociobiology.

Each male had two chicks at the start of the experiment, but by the end — after the pellets had completely degraded — many of the treated males had lost one of their two chicks to predators or other unknown causes of death, whereas untreated males did not experience this loss. The findings suggest that the stressed males allocated their resources to support one chick because they were unable to support two, study co-author Anne-Mathilde Thierry told Live Science.

The researchers were not especially surprised to find that the stress hormones took a toll on parenting because they found similar results in a study the year before, said Thierry, who now works as a researcher at the Norwegian Institute for Nature Research. But the new findings do add to the growing body of evidence suggesting penguin populations may shrink with future changes in sea ice.

"They are used to short-term stressors, like predators, and that won't change," Thierry said. "But the problem in recent years would be the food availability and the sea-ice conditions in Antarctica."

Changes in sea-ice distribution hit one particular Adélie colony hard this year: On eastern Antarctica's Petrel Island, not a single chick has survived the 2013-2014 summer season among the 20,000 breeding pairs that live there, Thierry said. The loss of those chicks underscores the importance of follow-up studies regarding how environmental change will influence penguin population growth and depletion, Thierry said.

The team next plans to attach GPS units to the penguins, to track their behavior while on land and while they forage for food underwater. This will help reveal how the penguins spend their time away from their chicks, and could help pinpoint nuanced behavioral changes associated with elevated levels of stress hormones, Thierry said.