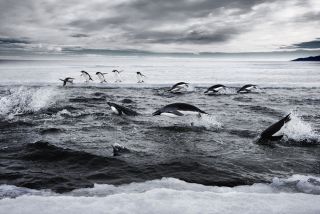 Antarctic warming has been a boon for one large colony of Adélie penguins, a finding that's surprising scientists.

A recent study found that over the last 60 years, a colony of the birds on Beaufort Island in the Ross Sea, south of New Zealand, increased by 84 percent, from 35,000 breeding pairs to 64,000 breeding pairs. This increase has come as glaciers have retreated from the island, leaving more bare, snow-free ground, where the penguins make their nests, according to the study, published this week in the journal PLOS ONE.

For food, the penguins still depend on sea ice, from which they forage. As the extent of sea ice has declined in Antarctica, it brings bad news for other colonies of the aquatic birds.

"This research raises new questions about how Antarctic species are impacted by a changing environment," said Michelle LaRue, study co-author and researcher at the University of Minnesota, in the statement. "This paper encourages all of us to take a second look at what we're seeing and find out if this type of habitat expansion is happening elsewhere to other populations of Adélie penguins or other species."

The penguins are smaller than the more well-known Emperor penguins, standing about 18 to 30 inches (46 to 75 centimeters) tall and weighing about 10 to 12 pounds (4.5 to 5.4 kilograms). They are listed as near-threatened by the International Union for Conservation of Nature because they are "expected to undergo a moderately rapid population decline over the next three generations owing to the effects of projected climate change," according to a 2012 study cited by the IUCN.