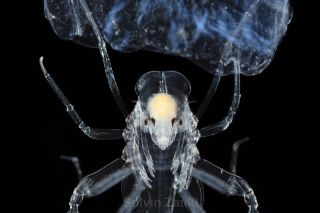 Meet a parasite that can create its own mobile nursery for its young, a parasite that is thought to be the inspiration behind the chest-bursting xenomorph in the film Alien. Meet Phronima, the pram-pushing, barrel-riding parasite.

These tiny creatures are found throughout the world’s oceans, except polar regions, swimming in open water. This sets them apart from their relatives, crabs for example, which typically stick to the safe confines of the seabed. Phronima has broken free of the sea floor, taking advantage of another sea creature, the salp, to survive in the open water.

Salps are barrel-shaped, gelatinous zooplankton which drift throughout our oceans. They may occur individually or in huge chains composed of individual salps linked together. Phronima attack these vulnerable creatures and make them their hosts. Equipped with impressive front claws, Phronima carves away their insides to leave an empty barrel structure. It then climbs inside and sails the sea from within, feeding off food and water on the go.

The Phronima-salp symbiosis poses a couple of key questions: has the Phronima killed the salp in the process of colonising it (in which case it would be classed a parasitoid and not a parasite)? And, why is sailing in this barrel an energy efficient enterprise for Phronima?

While Phronima has been difficult to study because it needs to be studied alive, before the salp structure is affected by air, and because it lives in the open ocean, studies of salps that have been hollowed out by Phronima show that they still contain live cells. This helps the barrel maintain its structure and gives the Phronima a sturdy home. But the hollowed out salp barrels hardly resemble a living salp, with just the tissue remaining. This being the case, Phronima should really be considered as a parasitoid rather than a parasite.

As for the energy involved in carrying around this barrel, the structure’s size and shape actually enables the Phronima to be more buoyant in the water. Some energy is still required to carry this jelly barrel. Overall energy usage by Phronima is higher than that of its relatives inhabiting the seabed, but less than other open water cousins who aren’t using such buoyancy devices. This suggests that Phronima have adapted to a unique niche which enables them to travel in the open water with their young and access new food resources without their behaviour being too energetically costly.

Although the barrel provides a safe home for Phronima’s offspring, the male pram bugs carry a barrel too. Maybe it helps to have a superior barrel when finding mates, we currently don’t know. Such unknowns leave us ever more curious about this, difficult to study, open ocean dwelling, creature.

Katie O'Dwyer does not work for, consult to, own shares in or receive funding from any company or organisation that would benefit from this article, and has no relevant affiliations.