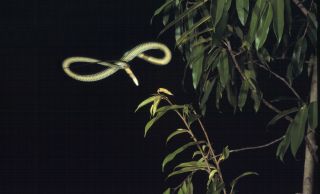 A flying snake flattens out into a weird flying-saucer shape in order to get some extra airtime, new research suggests.

The findings, published today (Jan. 29) in The Journal of Experimental Biology, show that the Southeast Asian snake's flattened, UFO-like cross-section gives it the right aerodynamic properties for gliding.

"The shape is unusual," said study co-author Jake Socha, a biomechanics researcher at Virginia Tech. "You never find this kind of shape in any other animal flyer; you don't find it in engineered flyers. We didn't know if that was a good shape to have." [See Images of the Flying Snake]

The weird flying snake, Chrysopelea paradisi, curls its tail around a tree branch more than 50 feet (15 meters) above the ground before launching upward, curling its body and gliding to the next tree limb.

While birds, and even humans using glider wings, are much better at their airborne maneuvers, the snake's performance compares favorably to that of other gliding animals, such as flying squirrels, lizards and even ants, Socha said.

Researchers already knew that the snakes curved around, splayed out their ribs to flatten their bodies and undulated as they were airborne — but they didn't know why.

"It looks like it's swimming in the air," Socha told LiveScience.

To answer one part of the puzzle, the team created physical models of the cross-section and tested them in a water tunnel, which, if set up properly, can have the same flow characteristics as air, Socha said.

It turned out that the flying saucer cross-section was a surprisingly good shape to take — much better than the cylindrical shape the snake would have if it didn't compress itself.

Compared to a more familiar flying shape, such as an airplane wing scaled down to snake size, "you'd find the snake is actually comparable," Socha said.

"The animal has figured out a solution to an engineering problem that we didn't even know we had," Socha said.

But don't expect to board a 747 with flying-snake-shaped wings anytime soon, as the shape wouldn't be nearly as aerodynamically effective at a plane's size and speed, Socha said.

Now, the team has to solve another mystery: why the snake undulates once or twice every second while gliding, Socha said.