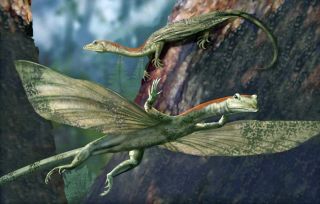 Paleontologists have discovered a new small gliding reptile in 220 million-year-old sediments of a quarry on the Virginia-North Carolina border. The new creature is named Mecistotrachelos apeoros, meaning "soaring, long-necked" and is about the size of a blue jay from head to tail.

"One of the really neat things about the new glider is the feet,” said Nick Fraser of the Virginia Museum of Natural History, who discovered the two fossils. “They are preserved in a hooked posture which is unusual and strongly suggests a grasping habit. I'm convinced it was using its hind limbs for grasping branches." Fraser noted that the Triassic Period reptile probably fed on insects, scuttling up tree trunks and foraging on the way, before gliding onto neighboring trees. Two other reptiles with similar gliding membranes are known from the Triassic, but Fraser noted that they have much shorter necks and therefore are more like modern gliding lizards. The findings are detailed in the latest issue of the Journal of Vertebrate Paleontology.

The lineage of the ancient reptile is still unclear, but Fraser thinks it is related to a group of extinct reptiles with long necks called protorosaurs—a group that includes the bizarre Tanystropheus, which toted around a neck longer than its body and tail combined.

"The length of the neck on these guys is really surprising," Fraser told LiveScience. "But what's even more interesting are the thick ribs near the base of the neck." He explained that such bones are indicative of beefed up muscles near the membranous wings.

"This would have given them much more maneuverability in the air than other gliders, even modern gliding lizards in the Malaysian rain forests," Fraser said.

Fraser and his colleagues can't be certain, but they think the gliders they found were blown off course and into a nearby lake with a muddy, silty bottom that eventually became shale.

Because the fossils formed in brittle shale sediments, Fraser and his team relied entirely on computed tomography scans, or CT scans, to study the specimens. The technology is typically used to create 3-D medical images of patients' bodies but in this case helped peer inside the shale to reveal the fossils. "This is a really cool little reptile which was very difficult to see until we looked at the CT scans,” said Tim Ryan of the Center for Quantitative Imaging at Pennsylvania State University, who led the scanning of the specimens.

Fraser thinks the long-necked specimens may rewrite the books about flying dinosaur evolution. "This is some of the best early evidence of strong aerial mobility," he said. "It’s certainly something that will make us look more closely at the origins of flying dinosaurs."