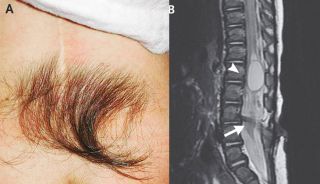 A tuft of dark hair on the back of a 3-year old girl (left) was a sign of underlying spinal abnormalities. On the right, an image of the spinal cyst and split spinal cord.
(Image: © The New England Journal of Medicine ©2014)

A young girl’s thick back hair was actually a sign of spine problems, according to a new report of the case.

The girl, a 3-year-old living in Taiwan, was taken to the doctor for removal of a tuft of coarse hair on her lower back.

Just after she was born, the child had undergone magnetic resonance imagining, which showed she had a split spinal cord, a condition known as diastematomyelia, as well as a fluid-filled cyst in the spinal cord, called syringomyelia. Some of her spinal fluid was also leaking out onto the skin surface. [14 Oddest Medical Cases]

The girl's condition is broadly known as occult spinal dysraphism, a group of spine malformations that are hidden from the surface, except for skin markings that, to the untrained eye, may seem unrelated.

But pediatricians know that if there is a marking on a child's lower back, they need to investigate because of its connection with underlying neural problems, said Dr. Toba N. Niazi, a pediatric neurosurgeon at Miami Children's Hospital, who was not involved in the care of the Taiwanese girl. These markings can include excessive hair (especially shaped like a horses tail), thin skin, dimples or small skin appendages that look like a tail, Niazi said. About 80 percent of children with occult spinal dysraphism have some type of skin marking, Niazi said.

These malformations involve many body structures, including nerves, muscle, skin and bones, and that's why markings often appear on the skin surface, Niazi said. "It's a malformation of the whole way the spine and skin is formed," in the affected area, Niazi said.

Dr. Ahmad Latefi, an attending neurosurgeon at North Shore-Long Island Jewish’s Cushing Neuroscience Institute in Manhasset, N.Y., said that hair growth on the back is a "classic" sign of a split spinal cord malformation, which the Taiwanese girl had.

If not treated early in life, occult spinal dysraphism can cause neurological problems or musculoskeletal deformities, Niazi said.

After her surgery, the Taiwanese girl had normal cognitive development, and no difficulty walking, said the researchers, from National Taiwan University Hospital. The child's parents were told she could have laser hair removal when she was "old enough to cooperate with the procedure," the report said.