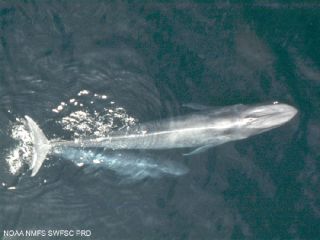 Michael Jasny is director of the NRDC Marine Mammal Project. This Op-Ed will appear on the NRDC blog Switchboard. Jasny contributed this article to LiveScience's Expert Voices: Op-Ed & Insights.

What do you do when an agency entrusted with protecting the environment seems incapable of doing its job?

Last month, the National Marine Fisheries Service, the agency that the U.S. Congress charges with protecting whales and other marine life, gave the U.S. Navy permission to harm marine mammals on an unprecedented scale. Off Southern California and Hawaii alone, the Navy is now allowed to kill 155 marine mammals outright, permanently injure another 2,000, temporarily deafen hundreds of thousands more, and cause widespread disruption of feeding, nursing and other behaviors that are essential to the animals' survival — a total of more than 9 million incidents over the next five years.

These are staggering numbers, the product of a massive ramp-up in training on the Navy's Pacific ranges. And the stats raise serious questions about the ability of some species to sustain all of this damage, to cope with the tens of thousands of detonations and hours of high-powered sonar use that the Navy has planned each year. Yet, remarkably, the Fisheries Service gave its blessing — allowing impacts to rise more than ten times above previous authorizations — without requiring any additional steps to reduce the harm. It will surprise no one that a number of conservation organizations, including my own, filed a lawsuit against both agencies today.

Ironically, the Fisheries Service's passivity comes at a time of heightened scientific concern over the Navy's long-term impacts on marine mammals. On the Navy's Bahamas range, sensitive beaked-whales that are repeatedly exposed to sonar have far smaller numbers and comparatively far fewer calves and juveniles than whales that live elsewhere in the islands. Biologists believe that the Bahamas range has become a population sink, making it difficult for the whales to reproduce or bring their calves to maturity. And that is exactly what government scientists suspect may already be happening off Southern California, where Navy training is even more intensive and beaked whale populations have declined precipitously over the past 20 years.

At the same time, researchers have discovered that Navy sonar disrupts blue whale feeding cutting off their deep-foraging dives, displacing them from krill patches and silencing their feeding calls over great distances. It's a significant problem since the Navy's Southern California range contains globally important foraging habitat for this endangered species. Blue whales, which vocalize deep down in the low registers, often below the limits of human hearing, were previously thought to be fairly impervious to higher-frequency sonar. Now biologists have concluded that Navy training may significantly risk the animals' recovery in the Pacific.

Reducing harm in this case isn't rocket science. The most effective available means of protecting marine mammals from Navy sonar and explosives training is to protect important habitat, as numerous expert bodies and agencies, including the Fisheries Service itself, have recognized. And yet, on a military range the size of the state of California itself, the service has not safeguarded a single jot of habitat for blue whales or other species.

Ultimately, the problem comes down to governance. Conservationists expect government agencies to maintain an arms-length distance from the entities they regulate, but that's hard to do when the entity has the power and sway of the U.S. Navy. In 2006, when the Navy first asked for permission to harm marine mammals during training, the Fisheries Service studied the request, deemed the Navy's analysis faulty and its mitigation inadequate, and pushed back, only to get overturned by President George W. Bush's administration. The service has become more and more deferential in the years since. While it has eked out some valuable research from the Navy, the service has given its bigger brother a pass on measures that can actually reduce harm. As for the Navy's Pacific Fleet, it is reluctant to make any concessions for any area on the grounds that it may be asked to do the same elsewhere.

Marine mammals receive special protection under the law not only because of their cultural and ecological significance, but also because they are difficult to study in the wild. The odds of detecting even a catastrophic decline in most whale populations remain alarmingly poor. The National Marine Fisheries Service does many positive things for whale conservation, but on Navy training, it is whistling past the graveyard.

Jasny's most recent Op-Ed was "Report Reveals Cause of Massive Madagascar Whale Stranding." The views expressed are those of the author and do not necessarily reflect the views of the publisher. This article was originally published on LiveScience.