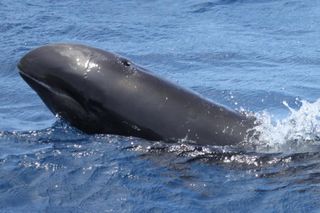 Michael Jasny is director of the NRDC Marine Mammal Project. This Op-Ed is adapted from one on the NRDC blog Switchboard. Jasny contributed this article to LiveScience's Expert Voices: Op-Ed & Insights.

Sometimes good science takes time. This week, more than five years after the fact, a report was released about a mysterious mass stranding of whales that made international news in its day, but has since been all but forgotten.

Few will be surprised to learn that the cause was manmade ocean noise, which has now been implicated in a succession of mass whale deaths. And yet the findings were completely unexpected — and raise yet more questions about the sufficiency of existing law to address this growing international problem.

On May 30, 2008, a pod of some 100 to 200 melon-headed whales turned up in Loza Lagoon, a large mangrove estuary on the northwest end of Madagascar. The lagoon was, needless to say, an inappropriate place for pelagic whales that tend to spend their lives in deep water. Despite intensive rescue efforts by both local authorities and experts from around the world, including my colleagues at the International Fund for Animal Welfare and Wildlife Conservation Society, the vast majority of the whales in Loza proceeded to suffer, starve and die.

The whole episode bore an uncanny resemblance to a mass stranding of the same species in Hawaii, during a major U.S. Navy exercise in 2004. In that case, an intrepid group of locals managed to lead the whales out of the lagoon using traditional methods — strands of woven vines gently pulled along the water's surface — but Madagascar was the darker flipside of that event. In Hawaii only a single whale, a calf, is known to have died. In Madagascar, it was a true catastrophe.

But what was the cause? At the time, attention immediately turned to Exxon, which was running exploration activities in the area. The high-powered airguns that companies use to find offshore reservoirs of oil and gas have the power to disrupt marine life on a massive scale, and have raised enormous concern among scientists and conservationists the world over. Yet Exxon hadn't deployed airguns off Madagascar. Nor was it using any of the other intense human sources of sound that biologists have identified as an environmental threat.

What the report demonstrates is that our understanding of the threat from underwater noise is too narrow. As it turns out, the "plausible and likely" cause of the Madagascar strandings was a seemingly innocuous acoustic device called a multibeam echosounder, which uses fans of sound to produce high-resolution maps of the sea floor.

No one thought to worry about echosounders before now. For years, regulators have focused on industrial and military sounds of lower frequencies, on the assumption that higher-frequency sounds are more quickly absorbed by seawater and do not pose the large-scale threat of an industrial airgun or naval sonar system. And echosounders, which are widely used by fishermen and oceanographers as well as by industry, typically use frequencies so high as to be completely undetectable to any marine mammal.

The echosounder that Exxon employed off Madagascar was, unfortunately, a very different animal. It produces sounds almost as powerful as the Navy sonar systems that have precipitated mass whale strandings and mortalities around the globe; and the sounds it generates are of similar, if higher, frequencies. Perhaps its only saving grace is that, unlike Navy sonar, echosounders are directed downwards towards the ocean bottom rather than directly out to sea, where the noise can spread even further. Even so, the report concluded that the Madagascar device would have ensonified the coast at levels known to disrupt whale behavior for close to 30 kilometers in all directions.

How widely are these systems used? That remains a mystery. But if there's anything one can say about ocean noise, it's that people are constantly underestimating the scale and scope of the problem.

Jasny's most recent Op-Ed was "How Landmark Noise Settlement Protects Oceans and Industry." This Op-Ed was adapted from the post "Death in a Lagoon" on the NRDC blog Switchboard. The views expressed are those of the author and do not necessarily reflect the views of the publisher. This article was originally published on LiveScience.