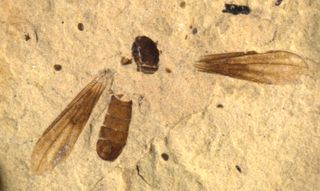 Scientists have found fossils of three species of big-headed fly that lived about 50 million years ago during the Eocene epoch. Big-headed flies, which belong to the family Pipunculidae, have very large eyes that nearly cover their entire heads.

"Big-headed flies are a group of bizarre insects whose round heads are almost entirely covered by their bulging compound eyes, which they use to hunt for mainly leafhoppers and planthoppers, renowned common garden insect pests," Archibald said in a statement.

One fossil was well-preserved enough to name it a new species. It was named Metanephrocerus belgardeae in honor of its finder, Azure Rain Belgarde, a student at the Paschal Sherman Indian School.

The research was published in The Canadian Entomologist.