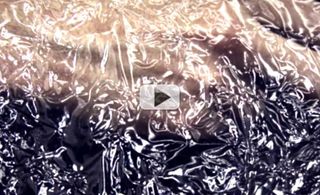 If imitation is the sincerest form of flattery, then insects have a lot to be flattered about. From cameras to robots, bugs have already inspired a lot of technology, and now two scientists working at Harvard's Wyss Institute for Biologically Inspired Engineering are looking to replace plastic with a new material based on the hard shells of insects. They call their material "Shrilk."

Traditional plastics are the children of oil. They are derived from the petrochemical process. Some take thousands of years to naturally degrade and "disappear" back into Earth’s environment. But bug parts break down in only a year or two.

Many insects, like houseflies and beetles, have rigid exoskeletons. So do ocean–dwelling distant relatives like shrimp. It's why they make such a loud crunching sound when you step on one. The exoskeleton is made out of cuticle, a composite of the natural polymer "chitin" and silklike strands of a rubbery substance called "resilin." Cuticle is light enough to allow many insects to fly, variable enough to be flexible at the joints and strong enough to protect an insect's internal structures.

Postdoctoral fellow Javier Fernandez and Wyss Institute director Donald Ingber created an artificial version of chitin that is light, clear, strong as aluminum but weighs only about half as much. Shrilk is also biodegradable.  This extends its potential uses beyond consumer plastics and into medical sutures, scaffolds and protective burn coverings that dissolve over time.

Making Shrilk required carefully analyzing the chemistry of insect chitin. Hard insect exoskeletons are made from layers of polysaccharide polymer and a protein in a plywoodlike structure. Insects use this relatively simple recipe to create hard shells and pliable joints.

Shrilk uses a structurally strong polysaccharide made from shrimp shells called chitosan (which can also be made from snail and clam shells) and a protein derived from silk called fibroin, layering them together just like in nature. Both of these materials are easy to obtain, meaning Shrilk could be cheap to make and easy to scale up should demand increase.

The U.S. Food and Drug Administration has already approved Shrilk's ingredients, which would make it easier to use for medical purposes. According to Ingber, a number of companies have already expressed interest in the material, but work on Shrilk continues in the lab, exploring ways to use the material in moist environments (it becomes flexible when wet) and in simplifying the manufacturing process.