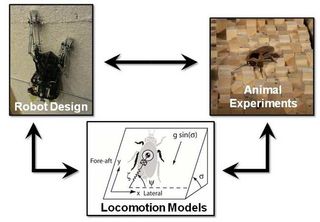 The research methodology John Schmitt and his collaborators use is an iterative process that utilizes animal experiments and reduced-order locomotion models to inform robotic design. The models aid the development and testing of high-level control strategies that can produce robust and efficient locomotion. Comparison of the animal dynamics to both the reduced order model and robotic dynamics can test our understanding of the underlying principles that animals employ to achieve their remarkable locomotion performance.
(Image: © Robert Full, University of California at Berkeley and Jonathan Clark, Florida State University.)

When John Schmitt looks at a fleeing cockroach, he doesn't see disease or dirt. He sees the perfect running machine. "I take my inspiration wherever I can get it," he said.

Schmitt, an assistant professor in Oregon State University's school of mechanical, industrial and manufacturing engineering, is trying to develop legged robots that can easily run over the roughest surfaces. He wants to create a robot that can run as easily as cockroaches and guinea hens, two creatures who seem to be able to do so without thinking, and without disruption.

Cockroaches, with their sprawled postures and splayed legs, slow only about 20 percent when going over blocks that are as much as three times higher than their hips. "Their remarkable locomotion performance has more to do with how they are built, rather than how they react," he said.

Schmitt and his colleagues have developed a computer model that allows a running robot to recover from a change in ground surface almost as skillfully as a guinea hen.

Furthermore, they are studying the interaction of energy storage and expenditure, sensor and feedback requirements, and leg angles to learn about recovery from perturbations — those events or obstacles that disturb motion, such as pot holes — so they can apply them to future robot design.

The goal is to eventually design the real thing, a robot that can cover rough terrain in dangerous circumstances — such as in the military, law enforcement or in space exploration. In humans, the knowledge might help improve prosthetic devices. "Hopefully, we could produce better prosthetic devices than the ones we now have," Schmitt said.

At this stage of the project, Schmitt, 36, doesn't actually work hands-on with the insects. Rather, his role is in developing computer locomotion models that use the animals as a foundation. For example, he began with the idea that guinea hens change their leg angle and leg length at touch-down to recover from drops in the terrain.

"Since the basic, vertical-plane locomotion model I am using [is] valid for a wide range of animals ranging from cockroaches to humans, I then looked to the cockroach for some ideas as to how the leg length should change during the time it touches the ground, and how the leg angle at touch-down should vary in response to a change in ground height," he explained.

His research colleague, Robert Full at the University of California, Berkeley, works directly with the cockroaches. "His work has focused on examining the muscle activation that occurs in cockroach legs as they run,” Schmitt said. "I haven't yet had the chance to visit [Full's lab]. I do know that as part of the initiation, he often has visitors to his lab hold a cockroach. While I'm a big fan of how they run, I'd probably not be as thrilled to be holding one. Yet, if I get the chance, I'm sure that I will."

He is married. His wife, Heather, who holds a doctorate in molecular biology and, "is currently trying to figure out exactly what she wants to do in the next phase of her life," he said.

His interest in science grew out of an aptitude for math and a fondness for solving logic puzzles. It's not difficult to see how these childhood interests evolved into an engineering career, with an emphasis on research.

"As a kid, trying to figure out how things work is primarily a difficult logic puzzle," he said. It's quite interesting taking items apart and seeing how the individual components fit together to produce the finished product. Becoming an engineer, however, requires the math to figure out why components work as they do — and how you can utilize that knowledge to design them better."

He found his earliest locomotion "models" in the creek that ran near his childhood home.  "I was always fascinated by the water striders and their ability to stay afloat and skim across the surface of the water," he recalled. "I had no idea how they were able to stay on top of the water, and be able to move so fast with just a simple motion. It's only in the past few years that we've learned how water striders utilize water surface tension to effectively row across the water surface.

"In terms of my interest in locomotion, that was certainly my first inspiration for wanting to figure out how incredibly simple biological organisms were able to perform remarkable feats, feats that in most cases have yet to be replicated or fully understood by the scientific community," he added. "Nature is full of these types of puzzles, and as scientists we are only beginning to scratch the surface of our understanding of how animals and insects achieve their level of performance."

Editor's Note: This research was supported by the National Science Foundation (NSF), the federal agency charged with funding basic research and education across all fields of science and engineering.  Any opinions, findings, and conclusions or recommendations expressed in this material are those of the author and do not necessarily reflect the views of the National Science Foundation.  See the Behind the Scenes Archive.