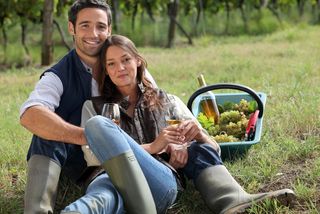 Yum, life really is sweeter when you're in love, at least that's what one study suggests. Researchers found that both candy and water taste sweeter when people think about love.
(Image: © auremar | Shutterstock)

Even water tastes sweeter when you're in love, new research finds.

But not every emotion heightens the senses. Jealousy fails to bring out bitter or sour tastes, despite metaphors that suggest it might, researchers report in the December 2013 issue of the journal Emotion.

That love alters one's sensory perceptions and jealousy does not is important to psychologists who study what are called "embodied" metaphors, or linguistic flourishes people quite literally feel in their bones. For example, studies have shown that people induced to feel lonely rate the temperature of the room as colder than do their unprimed counterparts. And the idea that important things have heft plays out physically, too: When someone believes a book is important, it feels heavier.

But "just because there is a metaphor does not necessarily imply that we will get these kind of sensations and perception effects," said study researcher Kai Qin Chan, a doctoral candidate at Radboud University Nijmegen in the Netherlands.

The taste of love

After seeing previous research on emotional metaphors, like the studies linking loneliness to coldness and heaviness to importance, Chan and his colleagues wanted to expand the question.

"We always say, 'love is sweet,' 'honey baby,' this kind of thing," Chan told LiveScience. "We thought, let's see whether this applies to love." [How Do I Love Thee? Experts Count 8 Ways]

Because Chan speaks Mandarin Chinese, he also wondered about jealousy, for which there is a Mandarin metaphor: chi cu. It literally means, "to ingest vinegar." There are similar metaphors in German, Chan said.

After surveying students at the National University of Singapore to be sure that they were aware of the "love is sweet" and "jealousy is bitter" metaphor, Chan and his colleagues conducted three experiments with students at the same university.

In the first two studies, researchers asked students to write about an experience either with romantic love or with jealousy, or about a neutral topic. Next, scientists had the students taste either Ribena Pastilles (a sweet-and-sour gummy candy) or Meiji Morinaga bittersweet chocolates.

The candies balanced bitter and sweet and bitter and sour equally, and it required a lot of taste-testing to find that quality.

"I bought like $80 worth of candies, because I was trying to find a suitable one," Chan said. "I was eating candies practically every day."

Next, the researchers repeated the study, but this time asking 93 new student-volunteers to sample distilled water instead of candy. Researchers told the students the water was a new drink product and asked them to rate its sweetness, bitterness and sourness.

Again, love made the water taste sweeter — even though it had no real taste at all. Jealousy did not affect the water's taste.

The finding is important for two reasons, Chan said. First of all, the fact that even water tastes sweeter when people think about love reveals that the emotion isn't acting on the taste receptors on the tongue, making them more sensitive to sugar. There's no sugar in the water, after all. Instead, the effect must arise from the brain's processing of the taste information.

Second, the lack of an effect caused by jealousy reveals language alone doesn't influences the senses — metaphors have to go deeper. Chan and his colleagues suspect that embodied metaphors develop only after a lot of experience. The linkage of love with the physical experience of sweetness may go back to infancy, he said. Babies start their lives drinking breast milk or formula, both of which are sweet, and may learn to associate that taste with their mother's love.

Similarly, a parent's physical warmth might be linked with closeness and acceptance, and being alone might be linked with feeling cold from an early age, Chan said. Even heaviness and importance have a physical linkage. Important books like dictionaries tend to be large and heavy, while fluffy reading usually comes in the form of lightweight paperbacks.

Editor's note: This article was updated on Jan. 23 to correct the Mandarin spelling and translation of the phrase "chi cu."