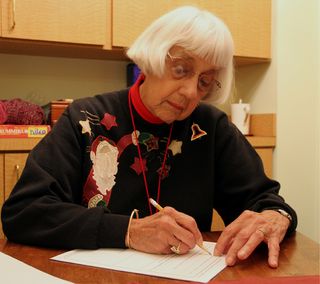 Identifying early signs of cognitive impairment in patients who have Alzheimer's disease, dementia or other cognitive problems may now be as simple as having them complete a short, self-administered test that only requires a pen and the paper it is printed on. It's called the SAGE test, or Self-Administered Gerocognitive Examination, and it is an inexpensive measurement tool that can be just as effective as other costlier, and more time-consuming, tests.

Approximately 4.7 million Americans currently have Alzheimer's disease, and those numbers are expected to jump to 13.8 million people by 2050. Additionally, 3 percent to 22 percent of Americans over the age of sixty are thought to currently meet the criteria for mild cognitive impairment. That's why neurologists across the nation are studying the disease and working to find new treatments.

Early intervention is the key to good treatment outcomes, as early pharmacological intervention may delay the progression of cognitive diseases. Unfortunately patients with Alzheimer's disease, for example, often wait three to four years after their symptoms first appear to seek treatment. My colleagues and I at The Ohio State University Wexner Medical Center created the new SAGE test so it would hopefully change those situations.

We studied the use of this test in community settings, such as at health fairs and at senior centers. We created four equivalent, interchangeable forms so that it could be given in almost any setting. During our five-year study, the test was administered at 45 different community events around central Ohio, and 1,047 people aged 50 or older took the test. No incentives were provided, and any individuals who had previously taken the test were excluded from our study group. Typically, two administrators at the events would distribute, collect and grade the test on the spot. Since this is a self-administered test, the people participating could take as much time as they wanted to complete it.

What we discovered is that 28 percent of people who took the test had some form of cognitive impairment. Most people completed the test within 15 minutes. Since one or two people can hand out, monitor, collect, grade and provide test results with interpretation to the individuals very quickly, this test is very practical and provides consistently reliable test results in small, medium and large community group settings.

And, the test can be printed out and administered virtually anywhere, with no computer or other kind of technology required. It is best scored by the patient's doctor, who can interpret the results in light of the person's health history and best determine if further evaluation and/or treatment is needed.

While the test cannot not definitively diagnose problems like Alzheimer's or dementia, it does allow physicians to screen for any cognitive deficits and to obtain our patients' baseline cognitive functioning, something we could monitor over time. We can periodically give the patients the test, and the moment we notice any changes in their cognitive abilities, we can intervene much more rapidly. We know that patients do much better if they start their treatments sooner rather than later.

Note: If you would like to read more about the SAGE test, the study was published in the January 2014 issue of the journal of Neuropsychiatry and Clinical Neurosciences.