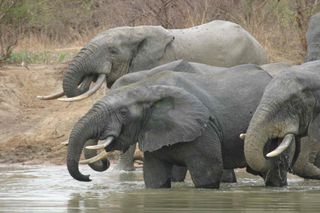 The mystery of an ancient battle between two warring troops of elephants has been solved, thanks to a modern genetic analysis of the lumbering beasts.

Researchers have now found that Eritrean elephants, which live in the northeastern portion of Africa, are savanna elephants, and are not related to the more diminutive forest elephants that live in the jungles of central Africa.

That, in turn, discounts an ancient Greek account of how a battle between two warring empires played out, with one side's elephants refusing to fight and running away, the scientists report in the January issue of the journal of Heredity. [10 Epic Battles That Changed the Course of History]

In the third century B.C., the Greek historian Polybius described the epic Battle of Raphia, which took place around 217 B.C. in what is now the Gaza Strip, as part of the Syrian Wars. During these wars, Seleucid ruler Antiochus III the Great fought against  Ptolemy IV Philopator, the fourth ruler of the Ptolemaic Dynasty in Egypt, whose last leader was Cleopatra. The matchup included tens of thousands of troops, thousands of cavalry and dozens of war elephants on each side.

The elephants were the "ace in the hole," able to trample the enemy and sow terror with their massive size.

"Elephants were considered the tanks of the time, until eventually the Romans figured out how to defeat war elephants," in later times, said study co-author Alfred Roca, an animal scientist at the University of Illinois at Urbana-Champaign.

Antiochus had easy access to Asian elephants from India, but Ptolemy didn't. Instead, he set up outposts in what is now modern-day Eritrea to get African elephants.

Unfortunately, that strategy didn't work out so well: According to Polybius' account, the African elephants turned tail and ran when they saw how gigantic the Asian elephants were. Ptolemy, however, was able to recover due to missteps by Antiochus and eventually won the battle.

In reality, Asian elephants are smaller than African elephants, so some historians speculated that perhaps the Ptolemies were using African forest elephants, which tend to be smaller, Roca said.

So Roca and his colleagues conducted a thorough genetic analysis of the elephants found in Eritrea, the descendants of the losers in the ancient battle.

"We showed using pretty much every genetic marker, that they were savanna elephants," Roca told LiveScience. "This was contrary to some speculation that there may be forest elephants present in that part of the world."

The team also found that there were just 100 to 200 African elephants left in isolated pockets in Eritrea, which could make them susceptible to inbreeding in the future.

The findings suggest that Polybius had it wrong, and the African elephants got spooked for some other reason than the overpowering size of the Asian elephants.

In other ancient documents, "There were these ancient semi-mythical accounts of India, and they claimed that India had the biggest elephants in the world," Roca said.

Polybius, who wasn't actually at the battle, likely read those accounts and surmised the Asian elephants' bigger size caused their opponents to panic.

In fact, until about the 1700s, when scientists actually measured the two, most people still thought Asian elephants were the larger species, Roca said. (And even now, games such as Age of Empires that recreate the Battle of Raphia depict the Ptolemaic elephants as smaller.)

Editor's Note: This article was corrected to note that there are 100 to 200 African, not Asian elephants in Eritrea.