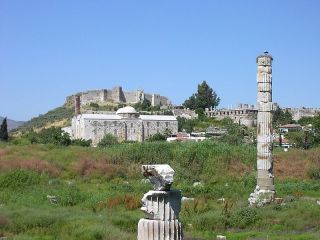 The site of the Temple of Artemis in Ephesus, where Cleopatra had her sister Arsinoe murdered.
(Image: © Adam Carr, distributed by Wikimedia under a Creative Commons License)

A Viennese archaeologist lecturing in North Carolina this week claims to have identified the bones of Cleopatra's murdered sister or half-sister. But not everyone is convinced.

That's because the evidence linking the bones, discovered in an ancient Greek city, to Cleopatra's sibling Arsinoe IV is largely circumstantial. A DNA test was attempted, said Hilke Thur, an archaeologist at the Austrian Academy of Sciences and a former director of excavations at the site where the bones were found. However, the 2,000-year-old bones had been moved and handled too many times to get uncontaminated results.

"It didn't bring the results we hoped to find," Thur told the Charlotte News-Observer. She will lecture on her research March 1 at the North Carolina Museum of History in Raleigh.

Arsinoe IV was Cleopatra's younger half-sister or sister, both of them fathered by Ptolemy XII Auletes, though whether they shared a mother is not clear. Ptolemic family politics were tough: When Ptolemy XII died, he made Cleopatra and her brother Ptolemy XIII joint rulers, but Ptolemy soon ousted Cleopatra. Julius Caesar took Cleopatra's side in the family fight for power, while Arsinoe joined the Egyptian army resisting Caesar and the Roman forces. [Cleopatra & Olympias: Top 12 Warrior Moms in History]

Rome won out, however, and Arsinoe was taken captive. She was allowed to live in exile in Ephesus, an ancient Greek city in what is now Turkey. However, Cleopatra saw her half-sister as a threat and had her murdered in 41 B.C.

Fast forward to 1904. That year, archaeologists began excavating a ruined structure in Ephesus known as the Octagon for its shape. In 1926, they revealed a burial chamber in the Octagon, holding the bones of a young woman.

Thur argues that the date of the tomb (sometime in the second half of the first century B.C.) and the illustrious within-city location of the grave, points to the occupant being Arsinoe IV herself. Thur also believes the octagonal shape may echo that of the great Lighthouse of Alexandria, one of the Seven Wonders of the Ancient World. That would make the tomb an homage to Arsinoe's hometown, Egypt's ancient capital, Alexandria.

The skull of the possible murdered princess disappeared in Germany during World War II, but Thur found the rest of the bones in two niches in the burial chamber in 1985. The remains have been debated every step of the way. Forensic analysis revealed them to belong to a girl of 15 or 16, which would make Arsinoe surprisingly young for someone who was supposed to have played a major leadership role in a war against Rome years before her death. Thur dismisses those criticisms.

"This academic questioning is normal," she told the News-Observer. "It happens. It's a kind of jealousy."

In 2009, a BBC documentary, "Cleopatra: Portrait of a Killer," trumpeted the claim that the bones are Arsinoe's. At the time, the most controversial findings centered on the body's lost skull. Measurements and photographs of the incomplete skull remain in historical records and were used to reconstruct the dead woman's face.

From the reconstruction, Thur and her colleagues concluded that Arsinoe had an African mother (the Ptolemies were an ethnically Greek dynasty). That conclusion led to splashy headlines suggesting that Cleopatra, too, was African.

But classicists say the conclusions are shaky.

"We get this skull business and having Arsinoe's ethnicity actually being determined from a reconstructed skull based on measurements taken in the 1920s?" wrote David Meadows, a Canadian classicist and teacher, on his blog rogueclassicism.

Not only that, but Cleopatra and Arsinoe may not have shared a mother.

"In that case, the ethnic argument goes largely out of the window," Cambridge classics professor Mary Beard wrote in the Times Literary Supplement in 2009.

Without more testing, the bones remain in identification limbo.

"One of my colleagues on the project told me two years ago there is currently no other method to really determine more," Thur told the News-Observer. "But he thinks there may be new methods developing. There is hope."