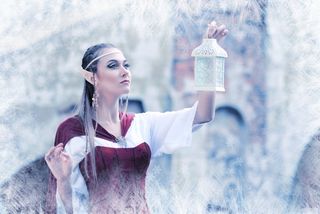 "Hidden folk," or elves, play a role in people's connection to the environment in Iceland.
(Image: © Olena Zaskochenko, Shutterstock)

Over the past few months, dozens of environmentalists in Iceland have staged a high-profile protest against a road scheduled to cut through an area of volcanic rock on the Álftanes peninsula, not far from the capital of Reykjavik. It is only one of countless eco-protests in the world, but the campaign has made international news, because some of the protesters claim the proposed road would disturb the habitat of elves who live among the rocks.

Elves and fairies are closely related in folklore, and though elves specifically seem to have sprung from early Norse mythology, by the 1800s fairies and elves were widely considered to be simply different names for the same magical creatures. Polls find that over half of Iceland's population believes in elves, or at least doesn't rule out the possibility of their existence.

But why do so many Icelanders believe? The passed-down tales are just part of the picture. Iceland's concept of the natural world takes on a mystical tone; pair that with environmentalism, the want to preserve this mystical world, and magical creatures almost make sense. [5 Real-Life Examples of Fairy Tales Coming True]

In the book "Icelandic Folk and Fairy Tales" (Iceland Review Library, 1987), folklorists May and Hallberg Hallmundsson explain how the Icelandic conception of nature is intimately tied to its folklore of elves and fairies.

"Icelanders are generally very attached to their country, perhaps more so than most other peoples ... It is a love for the land itself in its physical presence, for its soil, mountains, streams, valleys, and even its fire-spewing volcanoes and frozen wastes of ice," the authors write. "To the Icelanders, the land was never just an accumulation of inanimate matter — a pile of stones here, a patch of earth there — but a living entity by itself. Each feature of the landscape had a character all its own, revered or feared as the case may be, and such an attitude was not a far cry from believing that it was actually alive."

That life spirit said to inhabit the hills and streams of this island nation has come to be personified as elves and other magical beings. While it's easy to mock such folk beliefs as backward or antiquated, most cultures profess a belief in supernatural or magical beings, including demons, angels, ghosts and genies (djinn). These elves, like the fairies of early British lore, have many human qualities and may exact revenge if mistreated or disturbed. Elves and fairies are believed to live in their own separate, hidden world and generally ignore humans, but must be treated with respect; to do otherwise invites anything from mischievous pranks to child abduction by elves.

This wouldn't be the first ecological protest to involve diminutive magical beings.

Folklorist Andy Lechter, in his "Folklore" journal article "The Scouring of the Shire: Fairies, Trolls, and Pixies in Eco-Protest Culture" (October 2001), describes ecological protests involving fairies that are very similar to the current controversy in Iceland. "Fairies have inspired a counter-cultural movement. The 1990s in Britain were marked by large and dramatic public protests against a government-sponsored programme of road building, and ... opencast quarrying," Lechter writes.

"A distinctive protest culture flourished in response to this, combining the politics of direct action and an anarcho-travelling lifestyle, with a definite neo-pagan sensibility. This culture adopted an important fairy mythology which placed protesters within an almost fairytalelike struggle between the benevolent forces of nature and a tyrannical and destructive humanity."

Lechter notes, "In this animistic view, the natural world ... is threatened by human encroachment. Protesters see themselves as aided by, or aiding, these nature spirits. Here, the forces of nature, which include fairies, are regarded as benign, as opposed to humanity, which is seen as malign, corrupt, and divorced from nature." [Science Fact or Fantasy? 20 Imaginary Worlds]

The evoking of fairies and elves in the struggle to preserve natural areas not only captures the public's romantic imaginations but also taps into deep pre-existing social and cultural concerns about environmentalism. The theme of threatening new changes and the idea that modern ways disrupt the natural order of things are universal, and appear explicitly in many classic literary works. Perhaps the most famous is J.R.R. Tolkien's "Lord of the Rings" saga, in which the idyllic Hobbit homeland, the Shire, is threatened by dirty, polluting industrialization at the hand of evil wizard Saruman. The overcoming of peace and nature over-threatening change is a key theme in Tolkien's books, and conveys a powerful message of environmentalism.

It's easy to exaggerate the conflict and to caricaturize the protesters as crazy, lava-hugging environmentalists who are willing to be arrested to stop an imaginary elf village from being bulldozed. But disturbing the fairies is only one of several reasons offered by the protesters for why the road construction should stop; many challenge the legality of the road (the lava fields were officially protected in 2009, and may or may not remain so today), whileothers lament the impending destruction of a culturally significant local landmark (with or without resident elves).

Some Icelanders truly believe in elves, and many do not. Some of the eco-protesters in Great Britain, Iceland and Scandinavia are genuinely concerned about disrupting fairy villages, and some aren't. To most of them, it doesn't really matter; the important point is that the world's attention is drawn to what they see as an illegal and immoral destruction of pristine land.

Whether the road through the lava rocks will be completed remains to be seen, but if the protesters and elves can't resolve the situation, the legal system surely will.

Benjamin Radford, M.Ed., is deputy editor of "Skeptical Inquirer" science magazine, a member of the American Folklore Society, and author of six books, including "Tracking the Chupacabra: The Vampire Beast in Fact, Fiction, and Folklore."  His website is www.BenjaminRadford.com.