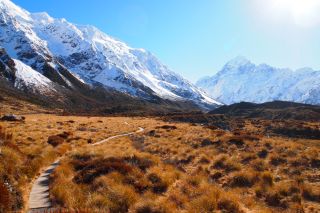 With a top elevation of 12,316 feet (3,745 meters), Mount Aoraki (also known as Mount Cook) is the highest peak in New Zealand and the crown jewel of the Southern Alps.
(Image: © Jesse Lewis)

J.R.R. Tolkien created a masterfully detailed world in his classic Lord of the Rings trilogy, right down to the topography and languages. Now a British climate researcher who might have too much time on his hands has plugged Tolkien’s maps into a supercomputer and predicted weather patterns for Middle Earth.

Dan Lunt, a scientist at the University of Bristol who specializes in climate modeling research, decided to put the Advanced Computing Research Center’s supercomputer to a dorktastic test. Lunt took Tolkien’s detailed maps of Middle Earth showing continents and mountains, and essentially “scanned” them into the supercomputer, the Guardian reported. Then he ran the numbers to get a 70-year model.

In a mock research paper published under the name Radagast the Brown, Lunt details climate details and weather predictions for Tolkien’s fictional world. He compared the climate surrounding Mount Doom in the heart of Mordor to that of Los Angeles and western Texas. I mean, obviously. But Lunt argued that those areas have dry, hot climates with little vegetation and therefore match the conditions in fictional Mordor.

Lunt also concluded that the Shire’s climate would have been close to that of real UK “shires” Lincolnshire or Leicestershire. Other insights: “The climate of Middle Earth has a similar distribution to that of Western Europe and North Africa” and “Ships sailing for the Undying Lands in the West set off from the Grey Havens due to the prevailing winds in that region.”

Dwarfs and elves can read the mock paper, too. Lunt translated it for them. That’s a true LOTR fan. I obviously can’t speak for the man, but imagine Tolkien would approve of this level of dedication.

Plugging fictitious data into reality-based computer interfaces is incredibly tempting. Anyone else remember that Google Maps gem that came up when asking for walking directions to Mordor? Heck, if I had access to that University of Bristol supercomputer I’d probably do similar number crunching.

Lunt told the Guardian that the exercise does have a serious side. Our climate models have become incredibly powerful, bringing together our understanding of science, fluid mechanics, cloud convection, sun radiation, biology and other factors.

“And because of that, they’re not just tuned for the modern Earth, they can simulate any climate,” Lunt said. Including ones that only exist in the future.