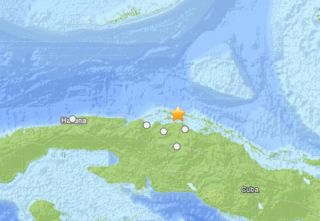 An earthquake of preliminary magnitude 5.1 struck just off the coast of Cuba today, causing shaking as far away as southern Florida, according to the U.S. Geological Survey (USGS).

The temblor, which was centered 24 miles (38 kilometers) north of Corralillo, Cuba, caused buildings in Havana to sway, the Associated Press reported, but there were no immediate reports of damage or inquiries and no tsunami warning was issued.

Earthquakes of this size can cause significant damage in areas with outdated building standards. The damage caused by any single event depends on the quake's depth, proximity to populated areas, as well as the type of earthquake. The USGS frequently updates the magnitude of an event after more data is analyzed.