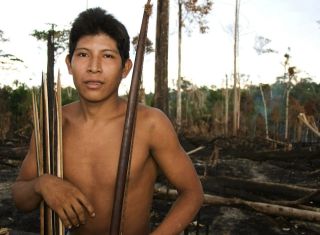 Tribe member Hemokoma'á stands in smouldering forest  in the Awá territory - 31% has been burned and destroyed by illegal invaders.
(Image: © ©Survival)

A tribe of indigenous Brazilians dubbed the world's most threatened are getting some breathing room in a new government effort to remove illegal loggers and ranchers from tribal lands.

The Awá, a group of about 450 men, women and children who are among the 800,000 or so indigenous residents of Brazil have been in a long legal battle over the rights to their lands in northeastern Brazil. The forested territory is of great interest to loggers, ranchers and miners, who have staked out claims in the area despite court decisions granting it to the Awá.

Now, Brazil's indigenous affairs department, known as FUNAI, has sent police and special agents to the territory to evict illegal squatters. [The Awá Album: Faces of a Threatened Tribe]

"This is a momentous and potentially lifesaving occasion for the Awá," said Stephen Corry, the director of Survival International, a tribal advocacy group that began a campaign to save the Awá in 2012.

Campaigning for an endangered tribe

In March 2012, a Brazilian judge published an order demanding the eviction of loggers and ranchers from Awá land by March 31, 2013. That deadline, however, passed without action as FUNAI lacked manpower and coordination with local agencies, Survival International reported.

"The Awá are just waiting and hearing the chainsaws on the land day and night, and the government hasn't gotten its act together yet," Survival International campaigner Sarah Shenker told LiveScience at the time.

In June 2013, police, military and Environmental Ministry special agents launched a ground campaign to shut down illegal loggers near the Awá territory. The clear-cutting done by these loggers threatens both the forest ecosystem and the hunter-gatherer lifestyle of the Awá, about 100 of whom are "uncontacted." That means they live a traditional lifestyle in the forest, avoiding interaction with outsiders.

Between June and July 2013, eight illegal saw mills were shut down, and the military destroyed other logging machinery, Survival reported. But the effort had not reached Awá land. Now, evictions in the tribe's territory have begun.

Threats to the tribe

Survival International dubbed the Awá "the most threatened tribe in the world," because deforestation caused by illegal logging has rapidly overtaken their land. The Awá Indigenous Territory — 463 square miles (120,000 hectares), or about the size of Los Angeles — has lost 30 percent of its tree cover since the 1980s, according to aerial surveys.

There have also been reports of violence as loggers push into protected territory. In 2012, The Telegraph reported that loggers burned an 8-year-old girl alive as part of a campaign of terror to move the Awá from their land. The reports came from a leader of a nearby tribe and from a Catholic group, the Indigenous Missionary Council. The Brazilian government was said to be investigating.

The uncontacted Awá, who hunt at night to avoid outsiders, are at the most risk, according to Survival International. Not only does their nomadic lifestyle depend on the forest, they lack immunity to common diseases transmitted by contact with such outsiders.